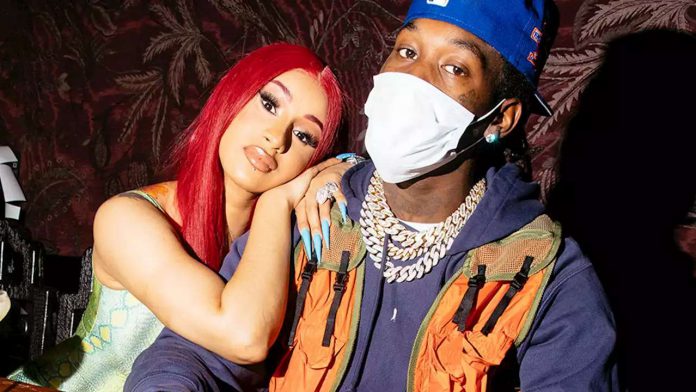 But they’re no longer ‘acting as a couple.’

Under the same roof. Cardi B and Offset are still living together amid their divorce—but that doesn’t mean they’re getting back together.
A source told Us Weekly on Wednesday, September 16, that the “Bodak Yellow” rapper and the Migos member haven’t moved out of the house they share in Atlanta with their 2-year-old daughter Kulture after Cardi filed for divorce from Offset after almost three years of marriage on Tuesday, September 15. “Cardi and Offset are still living together and parenting Kulture but are no longer acting as a couple,” the insider said.
The source continued, “There does not seem to be a chance for reconciliation for the two of them.” The insider also noted that Cardi and Offset’s mutual friends “are torn because they have such a deep love for each other and their lives are so intertwined.”
In her divorce filing, Cardi asked for primary physical and legal custody of Kulture, as well as ordered for Offset to pay child support. Per the court documents, Cardi said that her marriage with Offset is “irretrievably broken” and there are “no prospects for a reconciliation.” A court hearing is set for November 4.
A source told People on September 16 that Cardi filed for divorce from Offset after he cheated on her again. “Offset has pretty much cheated the entire time [they’ve been together],” the insider said. “She also didn’t want to be embarrassed.

But she’s had enough.”
View this post on Instagram WE MADE A FAMILY WHEN THEY THOUGHT WE WAS PLAYING I MARRIED U AND AINT LOOK BACK CAUSE I KNOW U GOT MY BACK @launderedworkscorp
A post shared by OFFSET (@offsetyrn) on Feb 6, 2020 at 6:43pm PST
This also isn’t the first time Cardi has filed for divorce from Offset. She filed to divorce him once before in December 2018 after a sex tape leaked of Offset and another woman in 2017. The couple reunited a month later in January 2019. In December 2019, Cardi opened up about why she decided to take Offset back after his infidelity.
“When me and my husband got into our issues—you know, he cheated and everything—and I decided to stay with him and work together with him, a lot of people were so mad at me; a lot of women felt disappointed in me,” Cardi said.
She continued, “But it’s real-life shit. If you love somebody and you stop being with them, and you’re depressed and social media is telling you not to talk to that person because he cheated, you’re not really happy on the inside until you have the conversation. Then, if you get back with them, it’s like, how could you? You let all of us down. People that be in marriages for years, when they say till death do us part, they not talking about little arguments like if you leave the fridge open. That’s including everything.”

Reign Disick Gets a Haircut and Kourtney Kardashian Is ‘Not OK’

People Who Trust Trump Are More Likely To Discriminate Against Asians...