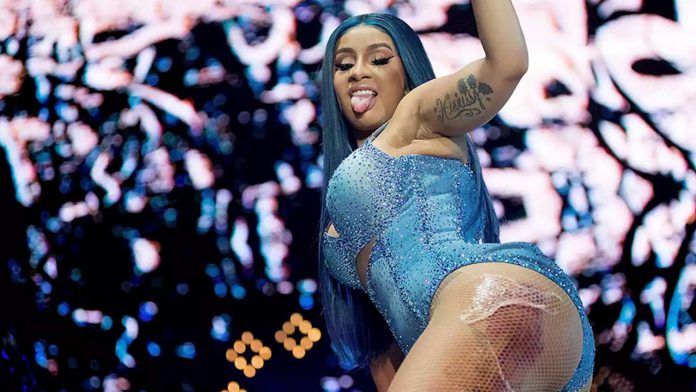 She makes her own checks, with or without Offset.

She makes money moves. Cardi B’s net worth is massive. Since her debut single, “Bodak Yellow,” in June 2017, Cardi has become one of the most successful rappers in the world. She’s won Grammys, reached number one on the Billboard Hot 100 (several times, in fact) and sold out tours across the world. Safe to say, Cardi B’s net worth is nothing to scoff at.
But Cardi B’s net worth wasn’t always in the tens of millions. In a 2017 interview with Global Grind, Cardi opened up about how she grew up with way less money than she has today. “I have real good parents, they poor. They have regular, poor jobs and what not,” she said at the time. “They real good people and what not, I was just raised in a bad society.”
When she was 19, Cardi started working as a stripper in Manhattan after she was fired from her previous job as a cashier. The money allowed her to move out of her abusive boyfriend‘s apartment and live on her own. “There was two pit bulls in that house, and I had asthma. There was bedbugs, too,” she told Vibe in 2016. “On top of that, I felt like my ex-boyfriend was cheating on me, but it was like even if he was cheating on me, I still can’t leave because—where was I gonna go?”
While she was still a stripper, Cardi became popular on social media platforms like Vine, Twitter and, of course, Instagram for her charisma and candid posts about sex and money. Her social media came caught the attention of the VH1 show, Love & Hip Hop: New York, which Cardi starred on for two seasons. Though she wasn’t a long-running cast member on the show, the series gave Cardi a platform for the music career she has today.
But back to Cardi B’s net worth. Ahead, we look at how Cardi makes her money and what she’s really worth.
View this post on Instagram This is @sirbabajagne appreciation post.He made a hat out of a purse .What would me @kollincarter and @offsetyrn do wit out you 😂😂😂
A post shared by Cardi B (@iamcardib) on Sep 7, 2020 at 4:53pm PDT
How much did Cardi B make on Love & Hip-Hop: New York? Love & Hip-Hop: New York is how OG Cardi fans came to know her. Cardi starred on the VH1 reality TV show as a main cast member for seasons 6 and 7. In December 2016, Cardi announced that she would be leaving the show to concentrate on her music career.

And as we know, that decision paid off.
So how much did Cardi make on Love & Hip-Hop: New York? According to Celebrity Net Worth, Love & Hip-Hop: New York cast members make between $17,000 and $400,000 per season. Given that Cardi was a new cast member who came later in the series and was only on the show for two seasons, we don’t expect that she made the max $400,000. However, according to Celebrity Net Worth, Cardi’s net worth at the time she was on the VH1 series was $400,000, which means that she likely still made a lot of money from the show as a fan-favorite cast member. (We estimate around the $200,000 to $300,000 per season range.)
How much does Cardi B make from her music? It’s unclear how much of Cardi B’s net worth is from her music (album sales, concerts, etc.) and from other business opportunities, but we do know that she made a lot of money from her 2018 debut album, Invasion of Privacy, which is certified three times Platinum (a.k.a. it’s sold three million copies—and counting) as of September 2020. Further, Cardi’s debut single, “Bodak Yellow,” is nine times Platinum. Other songs like “WAP,” “Money,” “Be Careful” and “I Like It” have also sold millions of copies.
According to Celebrity Net Worth, Cardi also signed a multi-million-dollar deal with her record label, Atlantic Records, in September 2017 after the success of “Bodak Yellow.” (The exact numbers of the deal aren’t known.) In April 2018, Cardi also made $170,000 for two 35-minute acts at Coachella. Along with her music career, Cardi has also had a collection with Fashion Nova, as well as continues to do spon con on her Instagram, where she has more than 75 million followers.
What is Cardi B’s net worth? The question everyone wants to know. What is Cardi B’s net worth? According to Celebrity Net Worth, Cardi B’s net worth in 2020 is $24 million. As we reported above, that accounts for her music career, as well as other partnerships. (And that also explains why Cardi and her ex-husband, Offset, whom she separated from in September 2020, have spent an exorbitant amount on their daughter Kulture’s gifts.)

How to lose weight safely in just 6 weeks