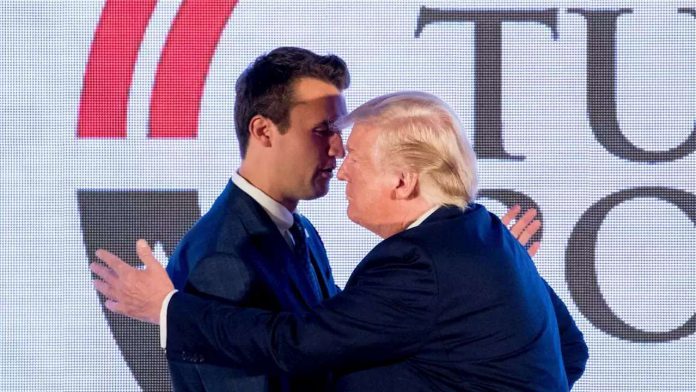 Would it surprise you to learn that Charlie Kirk and Turning Point USA’s political action arm are using their coterie of rightwing teenagers for evil, not good, and running what sure sounds like a troll farm?

to essentially turn themselves into bots and spam social media platforms with misinformation and pro-Trump messages, all calibrated to seem as if these posts were originating organically from high school students. But in reality, it was a carefully coordinated effort.
More on how Turning Point Action turned these teens into human bots for Trump, from the
Washington Post
:
Those recruited to participate in the campaign were lifting the language from a shared online document, according to Noonan and other people familiar with the setup. They posted the same lines a limited number of times to avoid automated detection by the technology companies, these people said. They also were instructed to edit the beginning and ending of each snippet to differentiate the posts slightly, according to the notes from the recorded conversation with a participant.
…
Several teenagers were using their real names or variations of their names, while other accounts active in posting the pro-Trump messaging appeared to be operating under pseudonyms. The Post’s review found that some participants seem to maintain multiple accounts on Facebook, which is a violation of the company’s policies.

Advertisement
As Graham Brookie, the director of the Atlantic Council’s Digital Forensic Research Lab, put it to the
Washington Post
, “In 2016, there were Macedonian teenagers interfering in the election by running a troll farm and writing salacious articles for money. In this election, the troll farm is in Phoenix.”
And here’s some of what that content from Kirk’s troll farm looked like, again via the
Post
:
One tweet claimed coronavirus numbers were intentionally inflated, adding, “It’s hard to know what to believe.” Another warned, “Don’t trust Dr. Fauci.”
A Facebook comment argued that mail-in ballots “will lead to fraud for this election,” while an Instagram comment amplified the erroneous claim that 28 million ballots went missing in the past four elections.
…
Equally impassioned rhetoric marked the campaign on social media, with posts asserting that Black Lives Matter protesters were “fascist groups . . . terrorizing American citizens” and decrying the “BLM Marxist agenda,” among other incendiary language.
G/O Media may get a commission

What Miley Cyrus and Liam Hemsworth’s Relationship Is Like a Year...