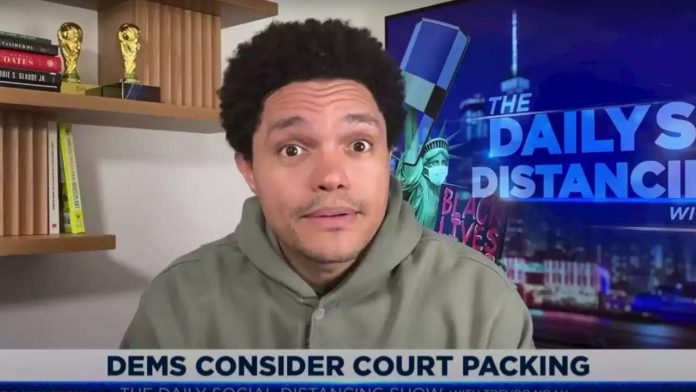 Save this story for later.
When Senator
confirmed on Tuesday that he would support a vote on President
Donald Trump
’s eventual Supreme Court nominee—despite the looming election—it all but assured that the Republican Party will be able to fill the seat left vacant by Ruth Bader Ginsburg’s death.
In the aftermath of his announcement—where Romney
a misleading “historical precedent” to account for his decision—many liberal observers were disappointed in the Utah senator, especially after he was the sole Republican to vote to convict Trump during the impeachment trial. But not
Trevor Noah
.
“I know some people were holding out hope that he would refuse to help the Republicans push through before the election. But for some reason, people always forget that Mitt Romney is still a conservative senator from one of the most conservative states,” the
Daily Show
host said on Wednesday. “People act like Mitt Romney came into the Senate with a pussy hat on, but, no—he’s only moderate compared to Cinnamon Hitler.”
He added, “And getting a majority on the Supreme Court is what Romney and other Republicans have been dreaming about for 50 years. On his bedroom wall growing up, Romney had a poster of Superman, a dancing horse, and an empty Supreme Court seat.”
For days, as the likelihood of a Republican-controlled Senate pushing Trump’s Supreme Court pick through became apparent, many have called for the Democratic party to eventually attempt to
. That is, to add more justices to the bench if and when the Democrats win control of the Senate (and presumably in that scenario also control the White House).

But one major Democratic figure who hasn’t endorsed that gambit is the party’s presidential nominee,
Joe Biden
. Asked by a local news reporter in Wisconsin if he supported a move to add justices to the Supreme Court should McConnell and the Republicans push through Trump’s nominee, Biden punted.
“It’s a legitimate question. But let me tell you why I’m not going to answer that question: because it will shift all the focus. That’s what he wants,” Biden
told
Action 2 News. “[Trump] never wants to talk about the issue at hand. He always tries to change the subject.”
Despite Biden’s reticence, however, Noah pointed out that the proverbial horse had already left the barn. “Even if Biden doesn’t want to charge into this debate, other Democrats definitely do,” he said after playing a clip of Minority Leader
Chuck Schumer
saying “everything is on the table.”
Advertisement
Not that their plan is foolproof, Noah surmised. “Obviously, once the Republicans get back in power, then they’ll add more justices to the court,” he said. “Which is why I think Democrats should just cut to the chase and make everyone in America a Supreme Court justice. I mean, think about it. Because of corona, most of us are already comfortable working in robes anyway—so it’ll be a seamless transition.”
But while the last four years have seemingly proven that any

4 Things That Could Be Keeping You From a Relationship