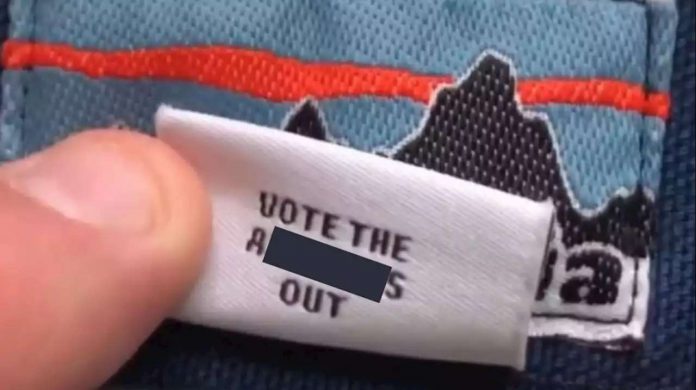 The brand said the tag on their shorts ‘refers to politicians from any party who deny or disregard the climate crisis and ignore science.’

September 12, 2020
HuffPost confirmed with Patagonia that the tags are real. Company spokesperson Corley Kenna said via email that they were added to the brand’s 2020 men’s and women’s Regenerative Organic Stand-Up Shorts “because we have been standing up to climate deniers for almost as long as we’ve been making those shorts.”
Kenna also said that Patagonia’s founder, Yvon Chouinard, “has been saying ‘vote the assholes out’ for several years.”
“It refers to politicians from any party who deny or disregard the climate crisis and ignore science, not because they aren’t aware of it, but because their pockets are lined with money from oil and gas interests,” she said, noting that Chouinard put more of his thoughts on that into a letter to the 1%
Many shared their reactions to the bold words embroidered into Patagonia’s clothing on Twitter, with some sharing that they’d be purchasing items from the brand because of this move:
I live in Texas but I think I need to get me some Patagonia ❤️
— W Foster🏳️‍🌈 (@pittsburghtx)
I just said the same thing! If confirmed, everyone in my family will be getting Patagonia for Christmas.

Box Office Tarantino’s Once Upon a Time in Hollywood’ Tracking 30...