Home Woman I’m Not A Woman Or A Man And Existing In This Binary... 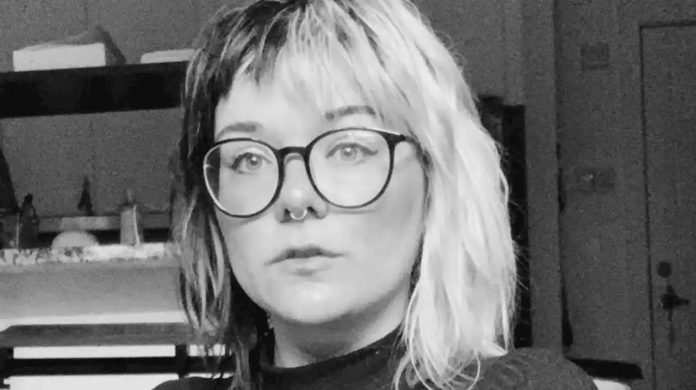 “The consequences are simple: I get the worst of both worlds — misogyny and catcalling, as well as homophobia and transphobia.’

many unique labels
as there are people who fall outside the binary. I probably fall into that agender category, although I still look pretty feminine most of the time. Luckily, nonbinary people aren’t required to be androgynous — makeup, hair and clothes are just products and choices, often based on financial means. They don’t constitute gender.
Courtesy of Abby Lee Hood
The author holding their fiddle at a restaurant in the early 2000s. They’ve always played bluegrass music, being from the South, and can still saw a pretty good”Road to Columbus.” Restaurants in rural areas of the South often have jam nights; this was probably one of them.
Still, in a room full of women I often feel othered, out of place. I don’t identify with feminine qualities, traits or characteristics. While it’s often hard to place exactly what I
do
LGBTQ people
and robs us of even basic language to help us define ourselves — simply put, I don’t feel like a girl. I don’t feel like a boy, either. I’m neither.
Because we’re just rediscovering the right words to describe nonbinary genders little things hurt, and we’re often dehumanized in such simple, succinct ways. Death by a thousand cuts, if you will. Just a few days after that man harassed me on the street, a former client sent me a DM on Instagram, opening with a “hey lady!” My pronouns ― they/them ― are in my bio and have been for weeks on multiple platforms. They’re even in my email signature. A few days prior, a close friend who knows I identify as nonbinary gave me a “hey, girl!” and our conversations about sexism centered heavily around women and girls’ struggles.
That’s another thing I didn’t expect about being nonbinary: Sometimes even queer allies — even your friends — get it wrong. And as someone who
hates
conflict, I ask myself if I’ve done enough to inform and educate the people I know about who I am. I wonder if my posts about being nonbinary have been enough. If having my pronouns visible on my social media accounts, which all of my friends can see, has been enough. If I have brought up being nonbinary in conversations enough.
But where do you draw the line between the personal responsibility of the queer person and the responsibility of others to do their part in pushing back against the overwhelming influence and effects of compulsive heterosexuality, of thinking of the gender binary as default? And who gets to say with any degree of certainty where someone’s responsibility begins and another person’s ends?
I knew I was nonbinary in childhood, although it took more than two decades to understand and define what it means for me, and I’m still not done learning.

I remember being in the car with my grandmother when I was a kindergartner and declaring I wish I’d been born a boy. I got in trouble for saying it. It probably had more to do with the fact that I couldn’t play how I wanted and I was already feeling held back, but
cisgender people
(or those who identify with the gender they were assigned at birth) generally don’t wish they are another gender.
Shortly after moving to Nashville in 2017, I became deathly afraid I was a boy. What would it mean to transition, to tell my family they had a son? I cried while looking at dresses hanging in my closet I didn’t want to wear anymore. I still don’t wear dresses much, but I also know I’m not a boy.
Then, after encountering new and more places to talk about, learn about and engage with nonbinary people ― even if it was just via Twitter discussions or when
Public Universal Friend
went viral ― and after doing a lot of thinking and feeling, I was able to publicly declare myself nonbinary in 2019. Still, that doesn’t mean that I don’t have to continually inform people of who I am and how I fit into the world. Most queer people have to come out many times to many different people. It’s not a one-and-done kind of thing.
While it’s often hard to place exactly what I do identify with — we live in a culture that erases LGBTQ people and robs us of even basic language to help us define ourselves — simply put, I don’t feel like a girl. I don’t feel like a boy, either. I’m neither.
It’s also important to remember that a person can be nonbinary and not heterosexual, too.
Gender is different than sexual orientation;
you can be trans and straight or trans and gay. Gender is how you perceive your gender identity, and it doesn’t have much to do with who you are attracted to. I’m bisexual, so I’m queer in both aspects, but that isn’t always true for everyone, so it’s best to just ask people what pronouns they use and not make assumptions about their sexual orientation.
Thankfully, things continue to evolve and nonbinary people are enjoying increased representation in the media, even if it’s still marginal. One of my favorite animated shows,

Target is bringing back the best pieces its their designer collaborations