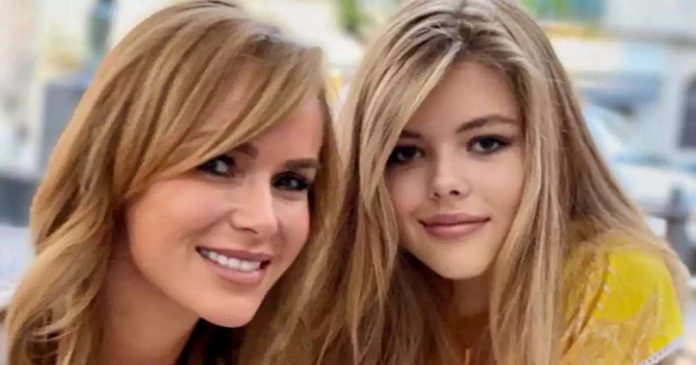 Amanda Holden has recalled the terrifying moment she returned home from Simon Cowell’s birthday party to find her daughter alone after the babysitter left.
The 49 year old attended Simon’s 50th birthday party back in 2009 with her husband Chris Hughes, when their daughter Lexi was just three years old.
But the Britain’s Got Talent judge, who has just released her debut album, was left horrified when she returned home to find Lexi alone.
Speaking on Sunday Brunch, the blonde bombshell remembered: “It was about 10 years ago now – [Simon’s] getting on.
Get exclusive celebrity stories and fabulous photoshoots straight to your inbox with OK!’s daily newsletter. You can sign up at the top of the page.
“We stayed there all night, and in the morning when we got home the woman looking after our kids thought we’d got home, and had left.
“It was seven o’clock in the morning and we walked into the house and no-one was looking after our children. Can you imagine? She was fired, can I say. It was a great party, with a horrific ending.”
She added that Lexi was “fine, obviously, but that was the scariest thing ever,” as she chatted to hosts Tim Lovejoy and Simon Rimmer.

Hours before her appearance on the morning show, Amanda performed on the Britain’s Got Talent semi-final, with her gorgeous dress sparking yet more complaints.
Amanda’s floor-length dark purple number featured one long sleeve and a corset bodice alongside a thigh-high split, allowing the star to flash her toned and tanned legs for all to see.
However, the asymmetrical black lace bodice appeared to reveal more than what viewers were expecting as many complained the gown was see-through to the point where they could see her nipples once again.
Amanda Holden Annoyed fans flocked to Twitter to voice their outrage at her dress as one person wrote: “Amanda Holden may as well just come on in a pair of nipple tassels #BGT #BritainsGotTalent”.
Another said: “#BGT Jesus, Amanda, may as well have wore nothing love.” as a third mocked: “Why don’t Amanda Holden just come in her underwear #BGT.”
Sunday Brunch airs Sundays at 9:30am on Channel 4

Bored in the house? These are the best films to watch...

Derry Girls’ Removed From Netflix In The UK After Rights Snafu