Home Woman Marti Gould Cummings Wants Your Vote But More Than That They Want... 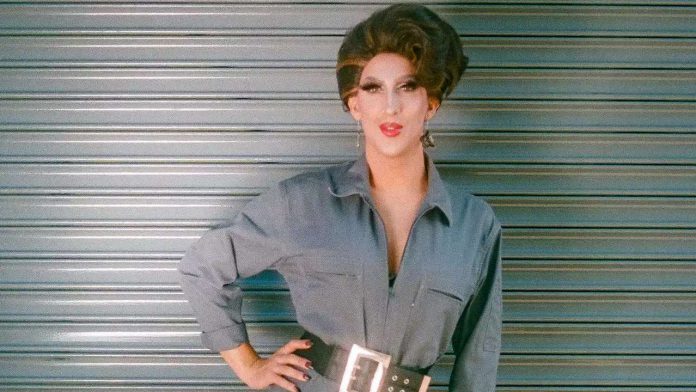 “Having Instagram followers—who cares? If you have that kind of attention on you, you should use it for good and try to be of service.”

local politicians
who are furthering the fight to make America more equitable; one such politician is Marti Gould Cummings, a longtime activist and fixture of New York’s drag nightlife who is currently running for city council in New York’s Seventh District.
Cummings, who sits on the City of New York’s Community Board Nine and is an adviser on the NYC Nightlife Advisory Board, would be the first nonbinary person to hold public office in New York state if elected in 2021. This September,
Vogue
caught up with Cummings to discuss being one year out from their campaign launch, the challenges that COVID-19 has placed on nightlife, the need to defund the NYPD, and their vision for a more inclusive New York.
Photographed by Hunter Abrams
What have the last few months looked like for you?
I’m at home in New York right now, where I live in Hamilton Heights with my husband Blake. It’s been wild—we launched the campaign in September of 2019, so the first several months was regular, and then when the pandemic started, obviously things took a shift. I’m super proud of our team and the work we’ve been doing, though.
What has it been like to campaign remotely?
When the pandemic began in March, our big concern was not about the campaign, but about the people of our district. I’m running to represent District Seven, which is 96th to 165th Street, and we first launched our campaign on a platform of housing justice for all, equal education, integrating our school systems—because New York has one of the most segregated school systems in the country, which is kind of mind-boggling—and criminal justice reform. Then, when the pandemic started, we began thinking, “How are we going to make sure people are going to pay their rent?” People who are experiencing income insecurity are now going to be experiencing food insecurity at higher, more alarming rates. If people aren’t able to pay their rent, and the eviction moratorium is lifted, the crisis of people experiencing homelessness is going to rise. So the pandemic really dramatically highlighted the issues we launched our campaign on. We’ve adjusted from a door-knocking strategy to a phone-banking strategy, just to ask our neighbors, “How are you? What do you need? How can we be of service to you?”
Advertisement
How did this summer of widespread protests and on-the-ground activism affect your campaign?
When the city council was doing its budget this summer, we really saw why budgets matter. Our campaign was really fighting for defunding the police, and I know a lot of people don’t like that language, but I think it’s really important to say, when you have a $
6 billion police budget
that militarizes your police and allows police to get away with literal murder sometimes, we need to be putting that money back into our communities. My community is one that’s greatly impacted; it’s an uptown district and oftentimes it’s overlooked. We have five NYC Housing Authority complexes that need addressing; the line at the food pantries gets longer every week; the education and sanitation budgets were cut, so there’s trash buildup happening more. Our campaign has been less about “Vote for me” than “People need help. What can we do to be of service to them?”
Did this summer’s events affect your thinking on any of these issues?
You know, our country is founded on the basis of bigotry. We live on stolen land, and our nation was built by people who were stolen from their land.

Even now, the news just came out that women are being sterilized at the border; when you have police forces who are getting away with murder and facing zero repercussions for shooting people in the back seven times, or shooting people in their sleep, or beating people in front of their children…of course, after years and years of this, and then a pandemic on top of it where people don’t know how they’re going to feed their families or pay their bills? People should take to the streets, and people should demand justice. People should be loud and vocal and fight back, and I was proud to show up as a queer person and stand up for Black lives and Black trans lives. I was arrested and got a concussion, but the reality is that because of the color of my skin, I walked out of that jail 12 hours later and was able to go home. How many people encounter the police and don’t get to go home, because of institutional and systemic racism that’s been part of this country since before its inception?
That’s
why we need to defund the police, and put that money back into communities of color, back into our education and health care systems, back into supporting small businesses and housing justice.
Advertisement
What perspective does your experience as a drag artist provide to your political work?
As a drag artist and gig worker who’s out of work myself, and on unemployment and trying to pay the bills, I can relate. Running as a drag artist was like, “Okay, what’s the next step? How can I use this platform that the universe has given me to be of ultimate service?” Having Instagram followers—who fucking cares? If you have that kind of attention on you, you should use it for good and try to be of service. I thought about it for many months, prayed and meditated on it, and then was like, I’m going to try to be the first drag queen and nonbinary person elected in the state of New York to pass laws that will help with the issues we’re facing. The experience of living paycheck to paycheck, of missing a doctor’s appointment because I don’t have health insurance…all of that has prepared me. Drag is about community organizing, community building, and bringing people together, and that’s what our campaign has done.
Are there any other local politicians who really inspire you?
We have great leadership uptown, and I’m really proud to have relationships with all of our electeds, but in terms of people who have inspired me in my own personal journey? I really look up to
Andrea Jenkins
, who is a city councilwoman in Minneapolis. She was the first Black trans woman elected in the country; she’s a friend of mine, and I really look to her for guidance a lot. She’s given me great advice over the years, and I’m super-grateful for her leadership, especially in the wake of George Floyd’s death. I think every politician should be like her, actually; she’s in this for the people and not for herself, and I think that’s what we need in politics.
Special Thanks: Parker Lawhorne, Selma Nilla, Brandon Garr, and Tyler Neasloney
Vogue Daily
The best new culture, style, and beauty stories from Vogue, delivered to you daily.
Sign Up Now

16 ELLE Editors On The Biggest Shoe Trends of Summer

If working from home is giving you a bad back here’s...