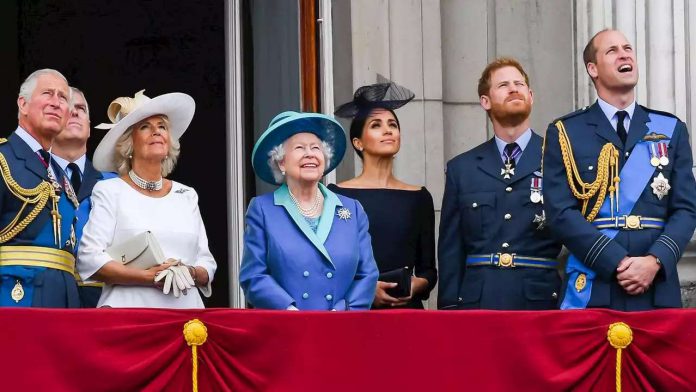 Transatlantic travel isn’t a given in the COVID era, but Harry’s rocky relationship with his brother is also said to be playing a part.

View saved stories
.
Christmas is likely to be very different this year for families around the world—and the royal family is no exception.
According to reports, the
queen
may be unable to host her traditional festive break at her Sandringham Estate in Norfolk, where the family gathers every year, because of the COVID pandemic.
Royal household staff
are said to be in revolt
over plans for them to work in a “bubble” and in shifts around the monarch’s timetable because of how it will affect their own family Christmases. However, one thing is certain: Wherever the queen spends Christmas, she won’t be joined by her grandson
Prince Harry
and his family, who have told friends they are “not ready” to head back to the U.K. for a festive family reunion.
According to a source close to the duke, Harry and
Meghan
have no plans to return to the U.K. in December, meaning they will miss a royal Christmas for the second year running. Last year they were overseas in Canada, where they started planning their departure from the royal family, and it has been nearly a year since the queen has seen her great-grandson Archie, although the Sussexes reportedly regularly speak to the queen on video calls.
“At this stage they are really enjoying their new life in California and their new home,” says a well-placed source. “There are currently no plans for them to return to the U.K. for Christmas.”
While the pandemic is seriously restricting transatlantic travel, friends of the Sussexes believe the real reason they won’t be in the U.K. for Christmas is because they know a family reunion would be tense after the fallout of the “Fab Four.”
“Let’s just say that while things are better between Harry and his brother, it’s not what it was, and I don’t think anyone is ready for a cozy family Christmas right now,” adds the source.
While the brothers have made an effort to speak more to each other, reconnecting when their father, the
Prince of Wales
, was sick with COVID-19, and touching base on family birthdays, they remain largely distant after falling out over Meghan.
The feud dates back to 2017, when
William
urged Harry to take his time before marrying Meghan around the time of the royal engagement. And according to the authors of
Finding Freedom
, the future king was wary of Meghan from the outset and “snobbish” toward the former actress.

Since then there have been ongoing tensions between the once close brothers, who at one point last year were so estranged that weren’t talking to each other.
William was said to be furious over his brother’s decision to leave the royal family earlier this year. Some believe the fallout has been so seismic, it could be as damaging to the monarchy as the abdication or the death of Princess Diana.
According to respected royal historian
Robert Lacey,
who has a new book out on the brothers’ relationship, the sibling rivalry could be potentially damaging to the crown in the long term if it is not sorted out.
“If this breach between the brothers is not healed in some way it will come to stand with the abdication crisis and the death of Diana as one of the traumas that changed the monarchy,” Lacey, a consultant on
The Crown
, told the
Daily Mail.
“There is time to change things in a positive direction, but at the moment the palace is not working in that direction.”
According to Lacey, the rivalry between the brothers dates back to when they were young children vying for their mother’s attention, when Harry often resented William, the heir, for being treated differently.
According to Lacey: “The palace got this very wrong, as it always does with the second-born. They always treat the second-born badly, not to say cruelly. It happened with Princess Margaret. It happened with
Prince Andrew
. It’s the classic ‘heir and the spare’ thing. They just don’t know what to do with the spare. And they certainly didn’t know what to do with the spare’s wife.”
Advertisement
Lacey is largely sympathetic in his book to Harry, whom he says has found a new destiny, and writes that Meghan has been mishandled by the royal family, who erred by not keeping close the first biracial woman to marry into the family. According to Lacey: “They just sent her off to watch the queen opening the Mersey Bridge. There is nothing wrong with that, but they made the mistake of dealing with the spare’s wife thinking she was just a routine royal. She was never going to be a routine royal.”
More Great Stories From

Blogger Claims Cardi B Assaulted Her with Threats but Cardi Calls...