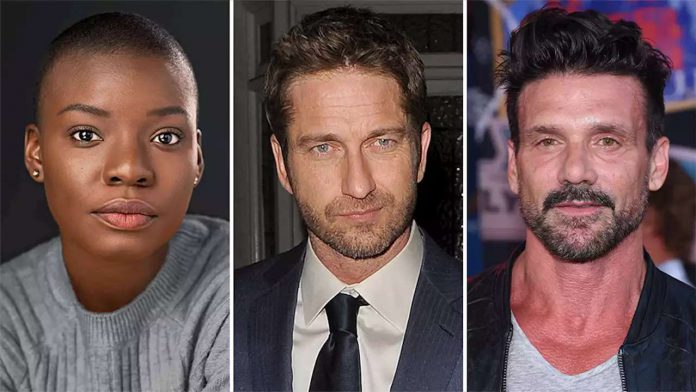 EXCLUSIVE: Alexis Louder (Watchmen) has come on board to star opposite Gerard Butler and Frank Grillo in the Joe Carnahan-directed action thriller CopShop, which just resumed production in Georgia …

being temporarily halted
because three crew members tested positive for COVID-19.
Carnahan penned the most recent draft based on the original screenplay by Kurt McLeod. The plot centers on a small-town police station that becomes the unlikely battleground between a professional hitman (Butler), a smart rookie female cop (Louder) and a double-crossing con man (Grillo) who seeks refuge behind bars with no place left to run.
Mark Williams and Tai Duncan of Zero Gravity Management are producing alongside Warren Goz and Eric Gold of Sculptor Media, Butler and Alan Siegel’s G-Base Productions, and Carnahan and Grillo through their WarParty Films production banner. Filming will take place in Georgia and New Mexico.

Raven Capital Management developed the pic in partnership with Sculptor and Zero Gravity and is fully financing the film. Executive producers are James Masciello, Matthew Sidari and Tom Ortenberg for Open Road Films. Open Road is releasing the movie theatrically in the U.S. with STXinternational handling foreign distribution and releasing directly in the UK and Ireland.
Louder, repped by TalentWorks, Haven Entertainment, and Goodman, Genow, recently wrapped Paramount’s
Tomorrow War
opposite Chris Pratt and appears in Showtime’s new limited series
The Good Lord Bird
. Other credits include recurring roles on
The Originals, Chicago P.D., Watchmen
and

Ellie Goulding explains why she and her husband live apart

Lizzo’s TikTok video of her hitting back at body shamers goes...