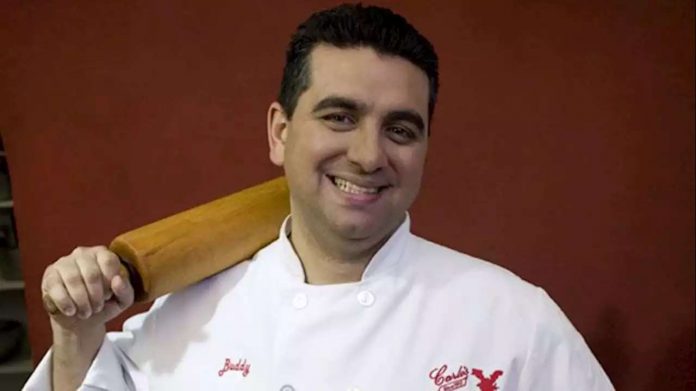 “Cake Boss” is getting back to work.

‘CAKE BOSS’ STAR BUDDY VALASTRO IMPALES HAND IN ‘TERRIBLE’ BOWLING ACCIDENT
“Family time is the BEST time,” Valastro wrote in his post. “Doing it all over again, left handed..”
In the picture, Valastro is seen icing a white cake at his Montville, N.J., home alongside his daughter, Sofia, 17, and two sons, Buddy Jr., 16 and Marco, 13.
His wife, Lisa, is close by and observes Valastro’s progress with a smile.
‘CAKE BOSS’ STAR BUDDY VALASTRO UNDERWENT TWO HAND SURGERIES AFTER BOWLING ACCIDENT
On Sept. 20, Valastro’s dominant right hand was severely injured after he tried to reset a malfunction pinsetter in the family’s at-home bowling alley.
When the celebrity baker briefly looked away from the machine, his hand was impaled by the pinsetter’s 1-1/2-inch metal rod three times, according to an interview he gave the “TODAY Show” on Monday.
“Before you know it… I turned my head for a second, and my right hand got wedged between a fork,” Valastro told the news outlet. “And then this other rod that goes through the fork… pierced through my middle finger and my ring finger.

And it was not a sharp object. It was blunt… it just blew out half my hand.”
HOW ‘CAKE BOSS’ SCALED CARLOS BAKERY TO BECOME A SWEETS EMPIRE
Valastro was rescued by his fireman brother-in-law and two sons, who cut through the metal rode to free his hand. The revered baker was taken to a hospital and eventually underwent two surgeries to address nerve, tendon and muscle damage.
Since the accident, Valastro’s activity on social media has taken a backseat to his recovery. The baker has only posted two photos of himself from his hospital bed and two birthday shout-out posts for his son Buddy Jr. and sister Mary.
Aside from the photos showing him icing a cake, two Instagram stories posted to his account show the “Cake Boss” skillfully applying what appears to be chocolate swirls on his white practice cake.
“It’s not bad,” his daughter says encouragingly in the first story.
Jessica Napoli contributed to this report
Cortney Moore is a Digital Associate Writer/Producer for Fox Business. Follow her on Twitter at

Could This Spice Be Your Next Performance Booster?

12 of the Best Brushes for Textured Hair