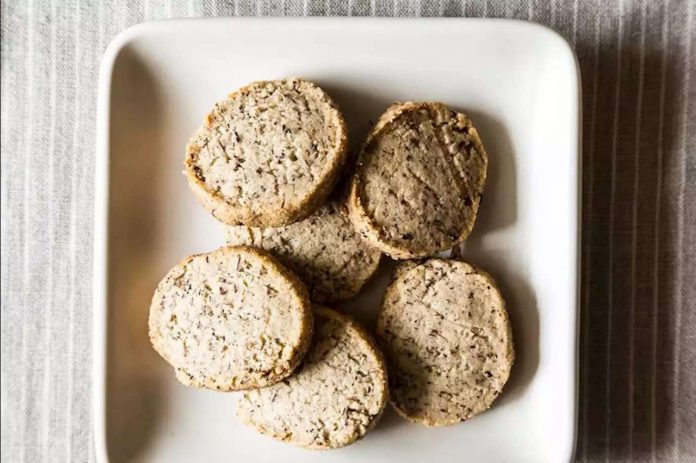 I really, really love Earl Grey tea cookies. There’s nothing better on a cold afternoon. So when I saw the vanilla contest pop up, I figured I’d try to make a recipe for vanilla tea cookies. I cobbled together a recipe with inspiration from my favorite Earl Grey tea cookie recipe (vintage The Kitchn) and from Heidi Swanson’s tip to use the whole bean in cookies. Since rooibos tea goes so well with vanilla, I swapped that in for the Earl Grey. The result is a crisp, buttery cookie with a seriously sultry flavor. My officemates gobbled them up in no time. As you can see from the photo, the first time, I tried to use whole rooibos leaves both in the cookies and mixed with the turbinado crust. Texture? Not so lovely. Much better ground up, which is what I recommend here. This also makes for a beautiful, toast-colored cookie: perfect for fall and winter.

Glad to hear you’re enjoying them!

Kristin
March 1, 2015
Wow, this recipe completely did not work for me. I followed the instructions very carefully and made no substitutions. And I’ve made shortbread before. I know the dough should be a little on the crumbly side. But”dough” was an extremely generous term for what was in my food processor at the end of the recipe….”sand” would be a better descriptor. I couldn’t even form it into a log. I’m thinking of adding some leavening and milk and turning them into scones, because I don’t want to waste the expensive ingredients.
I have no idea how other people are getting this to work out, but please share your secrets.

Rivka
March 2, 2015
hmm, that’s strange – I make these all the time and never have an issue. For what it’s worth, the butter is 1/2 cup, a whole stick – maybe you used half a stick? And my cup of flour measures 4.5 ounces, if that helps.

Kristin
March 2, 2015
The weight of the flour is helpful, I’ll try that next time to see. I used the right amount of butter and measured everything very carefully… I wonder if the humidity of the air or the temperature of the butter could be playing a role here? I see that a couple of other people also had dryness issues.

Kristin
March 2, 2015
However, the dough did come together after I added another couple teaspoons of milk, and it still tasted delicious. I managed to wrap it and get it into the freezer, where it’s been waiting for teatime today. We’ll see if it works! I do at least love your idea of grinding up the whole vanilla bean, that’s something I will use again for sure.

Rivka
March 2, 2015
Definitely. It’s also worth noting that as with other short-ish doughs, the dough looks like sand just a few seconds before it comes together into a blob. When dough is really crumbly, a few extra pulses (and a few after that) can make a big difference.

Kristin
March 2, 2015
Oooh that could be it. This was my first time using the food processor for shortbread, I normally use my pastry blender and hands. I was afraid of over-blending it in the processor and building up too much gluten, so I may have erred too much on the other side.

mv
January 1, 2015
The taste is great but the dough did not remotely come together for me. Against my better judgement I shaped a powdery log, froze it, and was then left with crumbly cookies pieces rather than slices to bake. In the future I will use more than 2 tsp milk to form an actual dough. Taste is worth trying again though.

Beware if your dough seems too dry, it probably is.

Sam
December 14, 2014
These are absolutely fantastic! I made this recipe almost exactly as written (subbed in 6 bags of earl grey, added a little more butter and a tiny splash more milk). They froze up beautifully in 30 minutes, and the 12 minute bake time was spot on (I have a finicky old oven). I may just quadruple the recipe next time to keep a whole stash frozen for whenever I feel like it – they are just that good. Thank you!

Claudia
August 15, 2014
Made these following the recipe — I love them! Never ground a whole vanilla bean like that, but it must have really added to the flavor intensity. I think you could play with these endlessly.

CurioCook
December 28, 2013
I’ve made these cookies so many times, and they never fail to disappoint. Such a lovely butter cookie. So delightful!! Recently I used this recipe, made one batch as written, made another minus vanilla bean (I ran out), and used some lavender earl grey tea instead of rooibos, and they were also amazing. Thank you!!

Vira
December 15, 2013
I made my first batch today! I have several days of gatherings with four sets of family and tomorrow is the first. I will start by saying they do indeed freeze well. They were firm but easy to cut which was wonderful. I made a few changes, however. I added 1 tbsp of lemon zest, used 1 tsp powdered vanilla instead of the bean, Rooibos Chai tea from Teavana, 2 tsp Almond extract instead of vanilla, 4 tbsp lightly sweetened almond milk instead of milk (my dough was a bit dry) and I didn’t toast the leaves. Instead I melted 3/4 cup of butter and then steeped the leaves in the butter for 10 minutes; 5 on low heat, 5 on no heat. I did extra butter because some of it sticks in the pan and doesn’t make it to the processor. I think for the next batch I’ll make them a bit more moist and probably grind the tea leaves up in my coffee grinder prior to adding them. Otherwise these are FANTASTIC! The flavor shines both on its own and in milk (almond milk for me) or in tea and the color is a very lovely golden brown at 12 minutes. I will definitely be making more varieties. Now just to hope my bread turns out just as awesome…Thanks for sharing!

xmascarol
December 11, 2013
Because I make my loose leaf rooibos tea with a bit of lemon zest and grated ginger, I’m going to make it that way for my infusion and see how it turns out. I think it will be quite good.!

Lana Condor is Exactly Who You Think She Is And That’s...