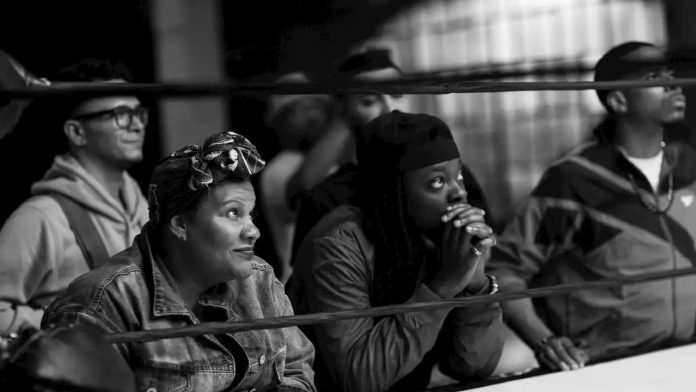 Save Story
Save this story for later.
There’s a certain kind of movie whose shtick has grown tired. It’s the “improbable person does improbable thing” genre: isn’t it wacky that such and such character is attempting such and such thing when, demographically, they shouldn’t be doing it? The modern iteration of this form probably started with the middle-aged-guys stripping smash
The Full Monty
and has continued up through
Patti Cake$
and the elder cheerleading comedy
Poms
. Which is why when I read the synopsis for
The 40-Year-Old Version
(Netflix, October 9), in which a nearing middle-aged playwright (writer, director, and star
Radha Blank
) makes a career pivot to rap music, I was resistant. The arc of these movies is almost always the same, a stale trajectory peppered limply with fish-out-of-water jokes.
What a delight, then, a true pleasure, that Blank’s film so cheerily, wisely resists that cliché.
The 40-Year-Old Version
is, yes, partly about a woman who is older than most upstarts in a youth-skewing industry trying to make a go of it. But Blank uses that template to explore something much deeper and vaster than the quick logline premise suggests. Her film is about the waning of youthful artistic zeal and potential and the waxing of something else, a more studied and self-aware but no less energized version of creative passion. With weary humor, Blank details how hard it is to sustain an actual, decades-long career in the arts, when the twin forces of public appetite (and money) and personal obstacle conspire to derail or deaden what was once so exuberant, so teeming with possibility.
Blank plays a version of herself, a nearing-40 playwright who won an award early in her career meant to enshrine her as one of the hot new talents on the New York theater scene. That distinction has since—as it so often does for people laden with praise at the outset—become both talisman and albatross. She can always point to it as a symbol of her promise; she can also point to it as a symbol of her promise unfulfilled. Radha earns her money teaching theater to high school students in Brooklyn, a lively bunch who like their teacher but question her authority—who is she to lecture them, the visionaries of a new generation, when her own creative output has sputtered and slowed to a trickle?
Throughout the film, Blank is hard on herself, but not self-flagellating. She’s also got plenty of heat to aim at the gatekeepers and institutions of the creative world, particularly New York theater, with its clucking, largely white, largely older producers and benefactors who swear they want to see a diversity of voices on stage, but so often limit what shape that diversity can take. In Radha’s case, a nuanced play she wrote about gentrification in Harlem must become both a blood-and-bullets gangland polemic that will titillate those financiers—while also confirming their prejudices—and a kind of placating, hands-joining peace offering to white gentrifiers who just want to live in a nice brownstone without being called a villain. It’s frustrating and demoralizing and embarrassing for Radha. But, it’s work.
The theater satire in the film is often spot-on, adeptly skewering the socioeconomics of commercial performing arts in New York (or even the wealthy, technically non-profit kind) in an era of compromised progress.

Blank doesn’t call out any specific work or institutions, but her meaning is clear. There is a bottleneck when it comes to creatives of color entering these rarefied spaces, and so often the contortions required to make it through leave all sense of truth and individuality outside the bubble.
It’s with that frustration that Radha turns to rap. Or, rather, returns. She used to freestyle a lot in high school, with the support of her best friend and now agent, Archie (
Peter Kim
). She finds that flow again in a moment of pure, accidental expression, alone in her little apartment trying to put word to her disgust and disappointment. Feeling a charge she has not felt in some time, Radha pursues this rediscovered form. Blank winningly, movingly depicts what a joy that can be, to feel the hum of inspiration again, the hunger it restokes to just
make
something—on one’s own terms, free of the strictures of funding and marketability.
That
The 40-Year-Old Version
concerns an almost-40-year-old who tentatively starts a rap career was a grabby enough hook to earn the film attention at Sundance in January. The richness of Blank’s film, though, is in how it transcends that simple setup. Blank’s writing has bite and amiable patter. It lilts and sighs before giving way to something furious. The film rambles a bit, but in that discursive length Blank is able to capture more of her milieu, the city streets and rehearsal rooms and hazy makeshift studios where Radha—who is grieving her mother in addition to her once golden career potential—struggles to jumpstart herself.
The film is shot in lovely black-and-white, which reframes this contemporary story as something more classic. Because, really, it is. It’s a showbiz dreams movie, albeit one with a slyer social consciousness than most old Hollywood fantasies. As a director, Blank has a calm command of space and motion. The film is handsomely mounted, with detail and wit. It has a lush glow, giving Radha’s setbacks and successes the almost noble aura they deserve. She’s a star performer too, funny and sincere and blunt. The supporting cast is strong, notably
Imani Lewis
as Radha’s problem student,
Oswin Benjamin
as the guy who supplies Radha’s beats and maybe more, and
Reed Birney
as a smarmy theater producer who urges Radha to make her writing more identifiably Black, as defined by him, an old, lecherous white man.
I suspect some audiences might be a little let down by
The 40-Year-Old Version
, because it doesn’t exactly satisfy a (totally understandable) desire for an uplifting underdog story. Plenty of those movies are out there, though. Blank’s film instead picks at something less frequently addressed: it’s a subtle plaint about the pervasive challenges of making art, particularly for a Black woman whose creative worth is so often determined by how much pain she can splash onto the stage for an outside audience’s nodding, condescending approval. It’s a thrill to watch Radha wrestle with that and then kiss it all off. And to watch Blank do it too, in this alternately measured and free-wheeling film. I can’t wait to see what she does next, as long she gets to do it just as she wants.
More Great Stories From