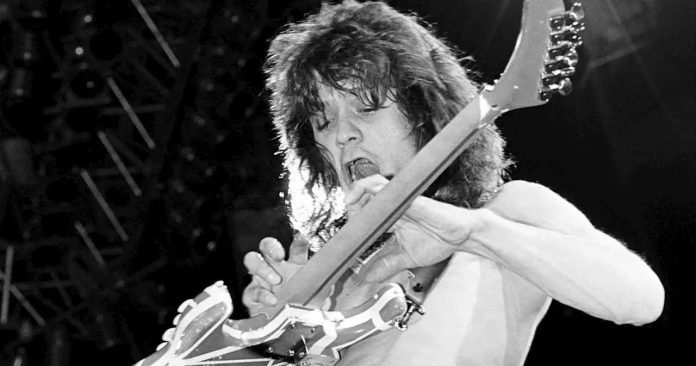 He imagined a sound and then set about chipping away at any hurdles, creative or technical, that got between him and the riff.

He was a mad scientist, a master of the form, a crucial point in the genealogy of guitar-based music for which he represents a distinct before and after. Photo: Ebet Roberts/Redferns When you think of Eddie Van Halen, what sound do you hear? Is it white-hot guitar notes flitting like bits of molten lava belched from the mouth of a volcano in “Eruption”? The echoing start-stop riff splashing through the mix in “Panama,” like high tide spraying a rocky beach? The lightning-fast blues lick from “Hot for Teacher”? The blunt-force chug of “Unchained”? Good guitar playing is alchemy. You’re using wood and metal (or acrylic and nylon) to conjure rain, fire, and thunder, like Jimi Hendrix in the blazing climax of his set at 1967’s Monterey Pop Festival or Pete Townshend doing the windmill at the climax of the Who’s “Baba O’Riley,” as recorded in Jeff Stein’s The Kids Are Alright. Van Halen, who passed away this week at 65 after a 20-year battle with cancer, was a mad scientist, a master of the form, a crucial point in the genealogy of guitar-based music for which he represents a distinct before and after. Van Halen threaded disparate strands — the virtuosic excellence of prog, the earthen bombast of early heavy metal, the wiry locomotion of punk rock, to name only a few — into a singular, pliable style whose influences are vast, whose impact is immeasurable. He made complexity look and sound joyful and easy.
Van Halen, alongside your Led Zeppelins, Queens, and Aerosmiths, was one of the great 20th-century hard-rock bands, and it owed a sizable portion of this reputation to its restlessly inventive guitar player, whose leads had as much presence as David Lee Roth, a front man who barked, howled, and shrieked his way from verse to chorus with such verve that the isolated vocal tracks are as much of a blast as any of the finished songs. Diamond Dave scaled those heights with Eddie (and the rhythm section of Michael Anthony and Eddie’s older brother, Alex), paving winding roads for him to travel. The quartet’s 1978 self-titled debut, a classic by any measure, played high-flying blues rock, blistering punk, and proto-thrash with the same reckless abandon, supposing these far-flung developments in guitar music weren’t so far apart at all. As the band gained its sea legs, it got showier and more intriguing. From the skyward notes in the opening bass and guitar duel through the unexpected clearing near the end of the song, Van Halen II’s “Light Up the Sky” imagines what Judas Priest might sound like if K.K. Downing and Glenn Tipton eased off of turbo to take in the scenery sometimes. Moments later, “Spanish Fly” does for flamenco guitar what “Eruption” did for the electric, whirring to a climax played a hair faster than the human ear can register.
Fair Warning’s “Push Comes to Shove” tackled disco and funk with an ease that made the Rolling Stones’ dabbling on Emotional Rescue around the same time feel like calculated expansion. At the end of the album, “Sunday Afternoon in the Park” and “One Foot Out the Door” substituted beefy synthesizer tones for limber fretwork, at once taking inspiration from the burgeoning synth-pop and synth-punk scenes of the era and signaling VH’s intention to use keyboards in a manner less chilly and symphonic than precursors like the Who’s “Baba” and Pink Floyd’s “Welcome to the Machine.” These experiments would position the band squarely in the middle of the ’80s pop Zeitgeist, and they rose to the occasion on the next album, 1984’s suitably titled 1984, a tour de force anchored by “Jump,” on which Eddie plays synths with the same lacerating attack he used for the guitar on early records.
These lines are further blurred on 1986’s 5150, where Dave is replaced by Sammy Hagar (a serviceable singer and songwriter who might be more fondly remembered by rock fans if only his contributions weren’t measured against the breathtaking highs of the first six VH albums) and keys creep closer to center stage than 1984 was willing to allow, such that in listening to tracks like “Summer Nights” and “Love Walks In,” it’s easy to forget what instrument is being played.

The shortfalls of the next two albums, 1988’s OU812 and 1991’s For Unlawful Carnal Knowledge — the cloying balladry and overlong compositions — are couched by enticing riffs and arrangements.
As you could hear shades of Genesis, Black Sabbath, and Jimi Hendrix in Eddie’s playing if you listened closely, you can hear shades of Eddie’s playing in the death-defying guitar solos of alternative-rock giants like Smashing Pumpkins’ Billy Corgan and Weezer’s Rivers Cuomo (the latter of whom has a forthcoming album titled Van Weezer and a band logo that’s a direct homage to Van Halen’s signature winged V and H); adventurous punk legends like the Minutemen, whose 1984 classic Double Nickels on the Dime contains a faithful cover of “Ain’t Talkin’ ’Bout Love”; pillars of metal like Pantera and Metallica; guitar geniuses like Devin Townsend and Buckethead; and arguably the entirety of the ’80s hair-metal circuit. Anyone who demolishes a hotel room or drafts a preposterous band rider is following trails Van Halen blazed. (Band beef will never be as cold as Hagar getting canned in the summer of 1996 and watching the band reunite awkwardly with Roth at the VMAs, only to pop up with Extreme’s Gary Cherone as lead singer for 1998’s too-ambitiously-titled Van Halen III, then reunite with Hagar and ditch him for Roth again in the 2000s.) Van Halen music has been flipped in rap songs for decades. Tone Loc’s “Wild Thing” borrows drums from “Jamie’s Cryin’.” Drake once rapped over a loop of the piano intro to “Right Now.” Young Thug tackled “Ain’t Talkin’ ‘Bout Love.” It’s only right, since the band made memorable covers of the Kinks’ “You Really Got Me,” Roy Orbison’s “(Oh) Pretty Woman,” Martha and the Vandellas’ “Dancing in the Street,” and more.
Eddie Van Halen’s impact on the guitar is more than a matter of perfect solos, influential techniques, and enterprising mixing of genres. His experimentation with synths was an endeavor he’d have to drag the band and their producer into; he’d record enticing song fragments in his home studio before fighting tooth and nail to get the rest of the band to bite. (The keyboard part that ended up on “Jump” was created during sessions for an earlier album and rejected. Resurrected for 1984, the song became the band’s first and only No. 1 on the Billboard 200 chart.) Frankenstrat — his signature red, white, and black guitar — took its name from the shifting rotation of Fender Stratocaster and Gibson parts he’d assembled it out of. In the ’80s, he created a patent for a contraption that propped up a guitar, freeing a musician from holding the instrument upright, an idea no doubt inspired by the tapping technique he popularized earlier in his career that allowed him to zip between notes by hitting the frets without having to strum. He continued tinkering in his later years as he did in his youth, drafting innovative solutions to the limitations of his instrument he’d encounter as he played it.
He imagined a sound and then set about chipping away at any hurdles, creative or technical, that got between him and the riff, all this without ever learning how to read music. He was self-taught and self-made, a Dutch-Indonesian immigrant who altered the course of music history by force of effortless style and restless forward thinking, who met the future excitedly, impressed by the possibilities. Van Halen’s gone, but the seeds he planted are thriving. The sounds he made are timeless.

UFC’s Amanda Ribas Raves About Fight Island They Treated Me Like...

How Can I Run Kimmy Schmidt’s Life When I Can’t Even...