Home Woman Emotional moment Phil Schofield came out to Holly – and her ‘incredible’... 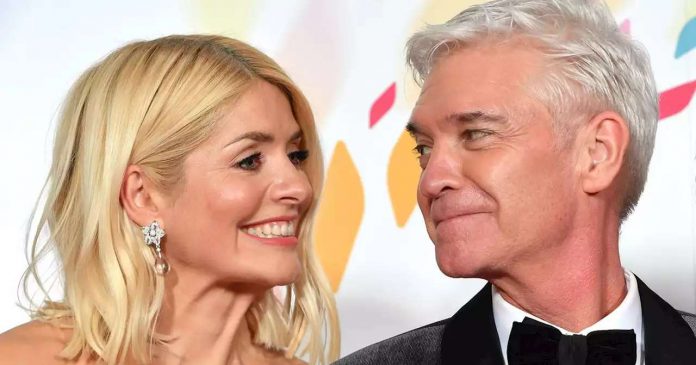 In public, Phillip Schofield’s persona has never deviated from the chirpy TV presenter who has been on our screens for the past 30 years.
But privately, for half a decade Phil has been secretly tormented by the realisation that he is gay. Having been married to wife Steph for 27 years, his turmoil was caused by his desperate desire not to hurt either her or their two daughters Molly, 27, and Ruby, 24.
It was Steph who he confided in from the beginning, and Steph who desperately tried to comfort and reassure him as his thoughts took him to a dark place.
Outside of their home, Phil’s secret remained just that with not even his closest friends aware of what was going on behind the scenes.
But it wasn’t that they didn’t suspect. Many of Phil’s closest friends and colleagues were deeply concerned about his health.
They had noticed the drastic weight loss and the preoccupied state of the usually buoyant star.
And no-one more so than his best friend and co-host Holly Willoughby, who had gently tried to encourage Phil to share whatever was on his mind.
“Holly knew something was wrong. A number of times she took me to one side and asked if I was okay,” Phil writes in his new autobiography, Life’s What You Make It.
“She never pushed, she was always so gentle and caring, but I could tell she was worried about me.

‘Please talk to me,’ she said. ‘Because I am always here.'”
Eventually – when he felt strong enough – Phil realised he needed to share the burden of his fears and there was no-one he wanted to share with more than Holly.
“One day I knew I had to tell her, because I needed her. I needed her advice and her wisdom and I needed her to have my back at work if I faltered,” he wrote.
He decided the best way to do it was to invite her to his dressing room, where he laid bare the torment of the last few years – and her reaction floored him.
“I told her everything. I knew she would be incredible, she was so much more than that,” he continued.
From that point on, Holly became his confidante, subtly helping him ‘hold everything together’ at work.
But it was after the emotional chat that the pair encountered a poignant sign that gave Phil hope that everything might just work out.
And he was so moved by what he found lying on the floor outside his door that he keeps the item in his wallet to this day.
He continued: “After I confided in her and after the hugs, I opened my dressing-room door. Perfectly positioned on the floor outside was a pristine white feather. She picked it up and gave it to me.
“‘See,’ she said. ‘It’s all going to be okay.’ The feather is still in my wallet.”

Trump Vows Coverage For Preexisting Conditions As He Fights To Kill...

Lili Reinhart Issues an Apology After Posting a Topless Photo to...

Lindsay Lohan to Be Maid of Honor For Mom Dina Who...