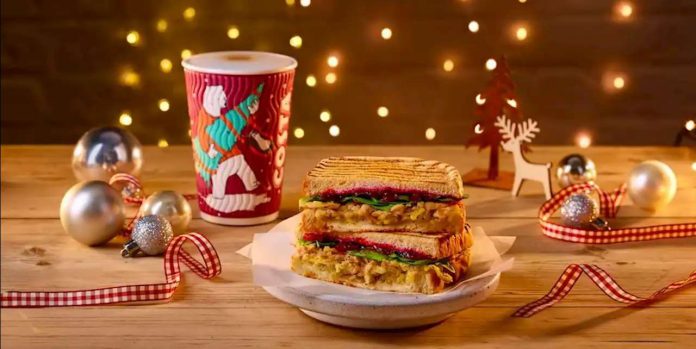 is just around the corner and this year’s seasonal coffee cups are about to start coming your way.
First up is
, which has announced it will launch its festive takeaway cups on Tuesday 3 November alongside a brand new food and drink menu. Because what is Christmas without a Costa Coffee Christmas Cup?
Costa Coffee
This year’s Costa Christmas cups feature FIVE new limited-edition designs, inspired by finding joy in the big and little moments. The cup designs feature:
The Rabbit and the Gingerbread Man posting their letter to Father Christmas (Mini)
The Gingerbread Man and Penguin are readying the festive decorations (Small)
The Polar Bear and the Penguin find the perfect tree (Medium)
The Rabbits build and decorate a majestic Snowman (Medium)
The Foxes merrily dance with gifts (Large)
The limited-edition Costa Coffee Christmas cups are fully recyclable, and also so cute!
Costa Coffee
New to the menu
is the Lobster Toastie, made with lobster, a rich béchamel sauce and cheese, and the new Vegan Turkee, Cranberry & Stuffing Bloomer Toastie – a vegan alternative to a Christmas lunch.

Also joining the line up is a British Pork & Bramley Apple Sausage roll, the British Turkey & The Trimmings Toastie.
Costa Coffee
Look out for the return of the Terry’s Chocolate Orange Muffin, filled with chocolate orange sauce, and finished off with a segment of chocolate orange on top, as well as a new Lotus Biscoff Cheezecake. Made with a Lotus Biscoff biscuit base, layer of velvety vegan cheese and finished with Biscoff spread and crumb.
Costa Coffee
There’s also a new Rich Chocolate & Hazelnut Shimmer Cake and the delicious After-Eight Muffin – a scrumptious chocolate muffin filled with a peppermint flavoured sauce, topped with white icing and finished with an iconic After Eight chocolate.
Costa Coffee
Elsewhere, the new Jammin’ in the Chimney Cake, a light vanilla sponge injected with a sweet raspberry sauce, topped with white icing and a piped sugar decorative topper showing ‘Santa’s legs’ going down the chimney .
The new Christmas cups and festive menu are available across Costa Coffee stores nationwide from Tuesday 3
rd

Why Trump Threatened To Stop Funding Mail-In Voting In Michigan