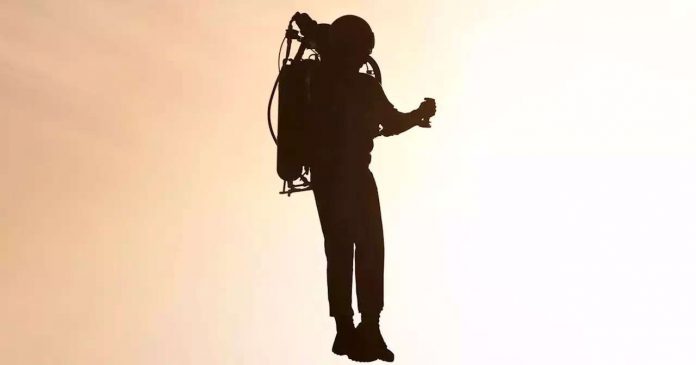 Who is the mysterious jetpack guy, and why does he keep coming back to LAX?

Who is he? Photo: Kevin Hyde/Getty Images/iStockphoto It’s a bird … it’s a plane … it’s … a rich person cosplaying as a Jetson?
In a delightfully strange turn of events, Los Angeles International Airport may be emerging as a national hub for futuristic solo travel, with three separate “jetpack guy” sightings reported in the area over the past two months. According to the Los Angeles Times, he first cropped up on August 30, when an American Airlines pilot warned the control tower at LAX that their plane had just passed someone wearing a jetpack 3,000 feet above ground. And then, per NBC News, a second pilot on a different flight (this one for Southwest Airlines) reported a similar incident on the same day, also above Los Angeles.
Here’s how the conversation went with the AA pilot, according to the flight log. Someone is probably hard at work optioning the exchange for film and TV as we speak:
AA Pilot: “Tower, American 1997. We just passed a guy in a jetpack”
Control tower person: “Only in L.A.”
And now, over a month later, jetpack guy — or, a jetpack guy — is back, baby. Per the Federal Aviation Administration, “A China Airlines crew reported seeing what appeared to be someone in a jet pack at an approximate altitude of 6,000 feet, about seven miles northwest of Los Angeles International Airport” around 1:45 p.m.

on Wednesday. According to CBS Los Angeles, reports of a “flying object” surfaced on air traffic radio communications, and local law enforcement is looking into it.
Meanwhile, the FAA confirmed the August sightings to NBC News on September 1, saying, “Two airline flight crews reported seeing what appeared to be someone in a jet pack as they were on their final approaches to LAX … The FAA alerted local law enforcement to the reports and is looking into these reports.” The FBI said it was investigating.
The fact that everyone is taking this so seriously is reason enough to suspect that jetpacks are real and some of them work quite well. There have been multiple attempts to nail down a decent prototype over the past several decades but none are widely available or approved by the FAA to fly over densely populated areas, according to the Times. For instance, JetPack Aviation, which claims to be the only company that’s developed a personal flight device that can be worn as a backpack, hasn’t sold any of wares to the public. They do offer flying lessons for $4,950 a session, but students must remain attached to wires the entire time. They’re based about an hour outside L.A.
Sources Los Angeles Times CNN

North West Just Had an Adorable Dance Off with Dad Kanye...

Curve Model Hunter McGrady Has an FYI ‘Not All Plus-Size Women...