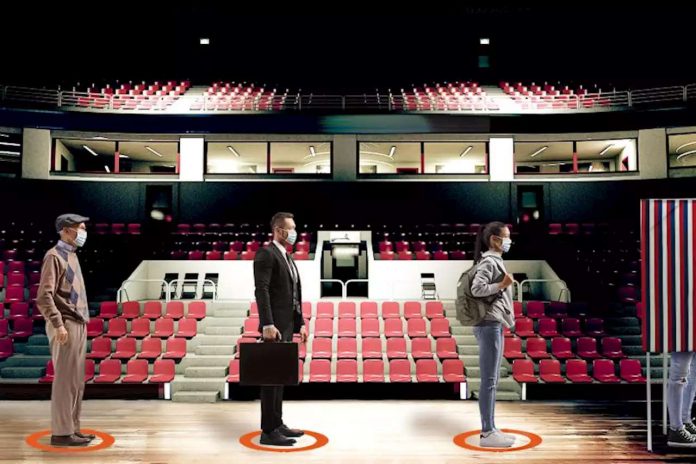 Cities like Milwaukee are nixing plans to open their arenas to voters. But the teams are still running a better play.

described
the group’s successful push to use NBA facilities as voting sites.
As a high-profile initiative with the specific goal of getting out the vote, it’s tempting to think that the stadium polling sites would
cause
higher turnout and participation—but they may be more of an
effect
of the many other forces driving high voter engagement this cycle.
“I think it’s a combination of widespread national interest in racial justice and the pandemic happening simultaneously [driving engagement]—and the fact that these arenas aren’t actually being used for sports [that] makes them available,” said Barry Burden, a political science professor at the University of Wisconsin-Madison and founding director of its Elections Research Center. “So it’s sort of a perfect storm of all these things coming together that’s made it sort of a natural extension for teams to make.”
Souls to the Polls has a stated goal of turning out 100,000 voters in Milwaukee. Anita Johnson is confident the group will meet it, in part by encouraging parishioners to go vote early and avoid the lines on Nov. 3. In Milwaukee, this is exactly where the Bucks wanted to fit in. But it’s also how they still
can
fit in. Because the real value the Bucks and Brewers were bringing to Milwaukee’s electoral operation was not necessarily the physical voting space; it was the manpower associated with it—the teams’ direct assistance with and explicit endorsement of volunteering and voting early.
The experts I spoke with—from Johnson in Milwaukee to elections experts like Burden and Kevin Morris of the Brennan Center for Justice,
who wrote a report about Milwaukee’s disastrous April primary
—said they believed that most voters would probably vote at the place most convenient for them, even if it’s not as glamorous as a pro sports facility.
“I don’t think [stadiums] are likely to turn out huge numbers of new voters who otherwise wouldn’t be voting somewhere else,” said Burden, even before Fiserv Forum and Miller Park were nixed as voting sites.
Still, it’s worth considering why things went badly during the April primary. It was not that Milwaukee lacked polling sites; it was that
the city lacked the workers to keep those sites open
.

Burden drew an analogy between the public health problems of the pandemic and the election problems incurred by cities managing COVID-19: “We’ve talked a lot about flattening the curve with the pandemic, trying to spread out the cases over lots of time and lots of places so we aren’t stressing the health care system. And the same can be true of the voting system. By having people vote on lots of different days and in lots of different places, you reduce the stress on Election Day itself in terms of lines and pressures on poll workers to run those polling places.”
A world in which Fiserv Forum and Miller Park are even being considered as voting sites is a world that is already funneling more of the necessary resources to its electoral

system.
The role stadiums play in flattening the voting curve varies from city to city, depending on a combination of local law, ownership interest, and arena availability. When early voting started in Georgia on Oct. 12, some suburban counties saw huge backups and daylong waits. But in Atlanta’s Fulton County, there were fewer problems—in part because State Farm Arena, home of the Hawks, was opened as an early voting site with free parking for voters. Voters there
encountered relatively short lines
, and the sight of Hawks head coach Lloyd Pierce working as a volunteer. Nearly 130,000 people cast ballots on the first day of early voting in Georgia, surpassing the first-day record set in 2016, despite the fact that some of the state’s polling sites were closed for Columbus Day. Next week, when early voting begins in Florida, the Orlando Magic will open the Amway Center in downtown Orlando. In Detroit, the Lions are offering Ford Field as a staging site and secure warehouse for ballots and equipment. Nevertheless, Milwaukee is not the only city where teams’ efforts have been stymied. In Houston, the Texans offered NRG Stadium up as a site for Harris County voters to drop off mail-in ballots—a helpful step. But now, thanks to an order from Gov. Greg Abbott
, NRG Stadium is Harris County’s
only

Kanye West Wants To Be President And He’s Inspired Other Celebrities...