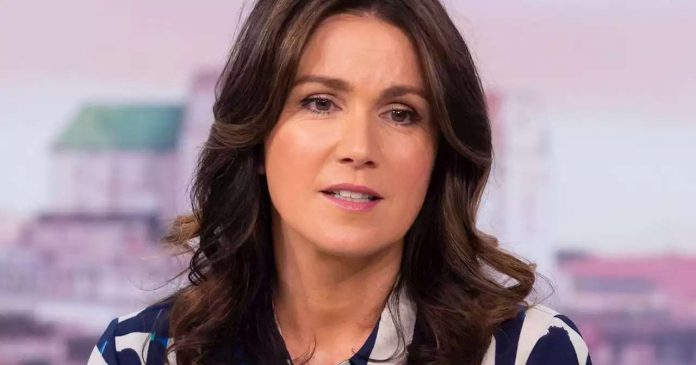 Kate Garraway was comforted by her co-star Susanna Reid after the presenter shared an update about her husband Derek Draper. Kate revealed that there had been several ‘ups and downs’ in his recovery

Good Morning Britain’s Kate Garraway was comforted co-star Susanna Reid after she gave an update about her husband’s condition in hospital.
The 53-year-old television presenter has been trying to remain positive while her husband Derek Draper continues to fight for his life after contracting Covid-19 in March.
Speaking on ITV this morning, Kate revealed there were several ups but also some ‘worrying downs’ in his recovery journey.
The mum of two was then comforted by Susanna in a touching moment during the show.
“I’m doing OK thank you,” Kate said this morning when asked by Susanna.
“The problem is, I feel like I’m boring everyone to death because it ends up being the same, he is stable but actually in between there are big ups and downs. Not big ups – small improvements and worrying downs.
Love celebrity gossip? Sign up for the Mirror’s daily newsletter for all the juiciest news
“The last few days have been pretty stable so we are keeping everything crossed.”
Kate then revealed that the recent lockdown restrictions meant that Derek’s parents have been unable to see their son in hospital.

She added: “Darcy has not been able to see Derek, his mum and dad haven’t been able to see him. They are in tier 2 in Lancashire and so could go into lockdown and might not be able to see him for months.”
Susanna later comforted her co-star and reassured Kate that she wasn’t ‘boring anyone’ by talking about Derek.
Susanna added: “It’s not boring anybody. I know you are concerned with that.
“But you are amazing because you always have a smile on your face, you are an inspiring person.”
Kate’s husband was struck down by Covid-19 in March before being put into an induced coma.
The former lobbyist has remained in intensive care and has only been permitted visits on very few occasions.
Kate and Derek’s kids Darcey, 14, and William, 11, have been unable to visit their dad in hospital.
Do you have a story to sell? Get in touch with us at webcelebs@trinitymirror.com or call us direct 0207 29 33033.