Home Woman Well This Is a Surefire Way to Get Cursed 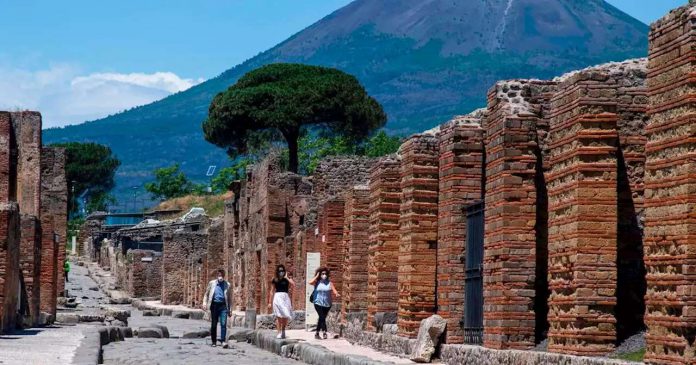 A tourist returned artifacts she stole from Pompeii 15 years ago, claiming they brought her nothing but misfortune.

Pompeii. Photo: Tiziana Fabi/AFP via Getty Images A good rule of thumb when visiting the historic ruins of unspeakable human tragedy is to leave things as they are. Or, at the very least, do not scrounge around them for souvenirs. This was the lesson one Canadian woman learned after she took bits of mosaic tiles, shards of an amphora vase, and a bit of ceramic wall from Pompeii in 2005 — stolen artifacts she now says cursed her and her family.
According to CNN, the woman, identified only as Nicole, recently mailed the artifacts back to the Archaeological Park of Pompeii, along with a letter explaining what she had been through. Saying that she was “young and dumb” at the time, Nicole explained that she took the ancient mementos because she “wanted to have a piece of history that couldn’t be bought.”
After returning to Canada with them, though, she says she was plagued by misfortune, suffering two bouts of breast cancer and financial struggles, hardships she attributes in part to the tiles she brought back with her from Italy.
“I took a piece of history captured in a time with so much negative energy attached to it,” she wrote. “People died in such a horrible way and I took tiles related to that kind of destruction.

Pompeii was an ancient city near Naples that was suddenly buried under nearly 20 feet of volcanic ash when nearby Mount Vesuvius erupted in 79 A.D. The eruption lasted two days, and while historians believe many of the city’s residents were able to escape, over 1,100 bodies have been found at the site, entombed for centuries in ash.
The site has been extensively excavated over the years, and is one of the most popular tourist destinations in Italy. According to a spokeswoman for the park, Nicole is far from the first visitor to have returned stolen, and allegedly cursed, artifacts. The spokeswoman told CNN that over the years, around a hundred visitors have sent back items they stole from Pompeii, like tiles or pieces of plaster, along with letters “claiming to have derived only bad luck” from the shards.
If any of you readers have also been struggling with a curse you contracted from a stolen artifact, or maybe a haunted box you touched by accident, perhaps reach out to Post Malone and see if he has any tips about how he navigated his own curse.