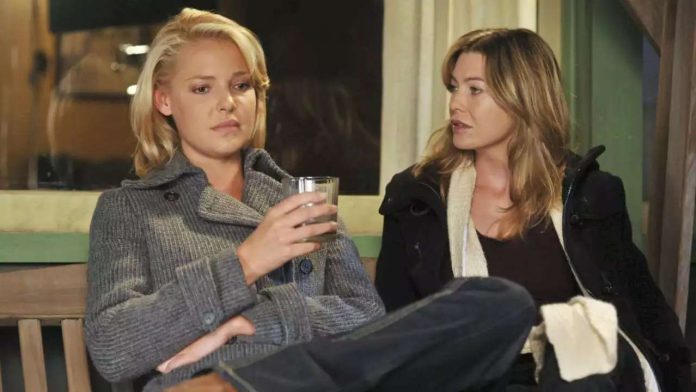 Fans thought this could imply that Heigl would be returning as a part of Meredith’s ‘COVID dream.’

came back to the show
amid Meredith’s”COVID dream,” fans are desperate to know who else the comatose doctor might see while battling the coronavirus.
In a new clip for the upcoming episode, which fans will have to wait two weeks to see due to the Thanksgiving holiday, Meredith is seen calling out to someone on
that
infamous beach in her flowy white top.
Though Izzie didn’t die on the show, some fans thought Pompeo’s GIF might be a hint at a potential Heigl return.
“Izzie’s gonna come back and her and jo are gonna fight that’s what this gif means,” one commenter wrote.
“I feel like it’s a hint that Callie or izzie will be back,” another fan wrote.
Not directly addressing the speculation about Izzie, Pompeo did tweet,”If you really think about it… there’s a lot of people it could be.

If you really think about it… there’s a lot of people it could be
— Ellen Pompeo (@EllenPompeo)
The Heigl GIF also comes after Pompeo and Heigl’s former
Grey’s
Isaiah Washington, publicly called Heigl out
on Twitter earlier this week.
“This woman once proclaimed that I should ‘never’ be allowed to speak publicly again,” he wrote alongside a picture of Heigl.”The world agreed with her proclamation back then and protested for my job and my head in 65 languages. I wish I was on Twitter in 2007, because I will NEVER stop exercising my free speech.”
Heigl has not publicly commented on Washington’s recent claims, but did previously allege that Washington had made a homophobic slur towards their co-star T.R. Knight on-set.
Within months, ABC announced Washington would

DMX Will Challenge Snoop Dogg for Verzuz Battle of the Dogs’

How to Maintain Sexual Satisfaction in Relationships