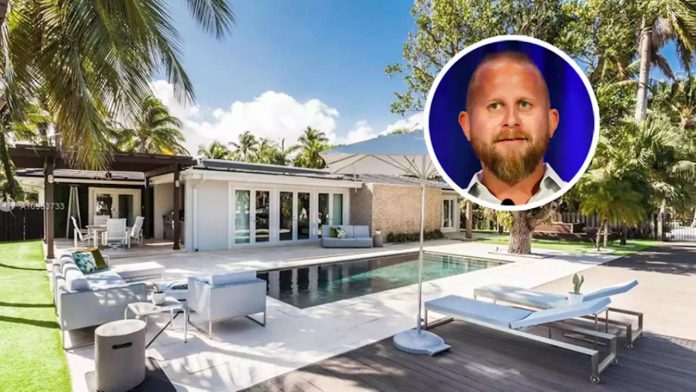 With President Trumps’s voter-fraud court cases being tossed out, his former staffers are selling up and moving on. Case in point, his onetime digital guru and campaign manager, Brad Parscale, who …

overwhelming stress
.” Still, if it sells for near the asking price, the close to half a million he stands to earn on the sale of the four-bedroom and 4.5-bathroom home, which he purchased in early 2019 for $2.4 million, will surely turn his frown upside down.
There’s never a good place to have a public meltdown, and the video of his police surrender is a sobering one for anyone who is feeling overworked and/or under extreme mental stress. If it’s a consolation, Parscale’s sleekly renovated 3,400-square-foot home, with its soothing canvas of white walls, tan marble floors, wood accents and pretty water view, was surely a relaxing place to recuperate. According to
Realtor.com
, who first broke the story, the single-story residence includes an integrated Sonos sound system and snazzy Lutron lighting for setting the mood at a chill level.
Just inside the front door, a lounge area with all the coziness of a hotel lobby features a full wall of lighted built-ins that include a wine fridge and built-in coffee maker. The room flows easily into the adjoining dining area and chic chef’s kitchen. Wooden lower cabinets are juxtaposed with white laminate uppers and a funky black-and-white speckled mosaic tile backsplash. (Presumably Parscale will take the huge aquarium when he vacates.)
The master bedroom also has the luxurious if not particularly personal ambience of an upscale boutique hotel, with a back-lit wood-paneled wall and an extended padded headboard.

The spa-like bath includes a steam shower and glass wall beside the toilet, revaling a tiny faux-grassed courtyard hemmed by a stacked stone wall that, one hopes, keeps the naughty Tom and Tinas from peeping.
French doors open the monochromatic bedroom to the backyard with its swimming pool, spa, and fir pit. Tucked off on the home’s side, a covered dining patio has a complete outdoor kitchen highlighted by a wall of shimmering metallic tiles and, beyond the pool, a huge deck with boat lift cantilevers over the glassy waterway.
If Parscale’s home looks decidedly more stylish than the usual politician’s abode, that’s because he once made a living flipping houses. And, according to an interview with the
Daily Mail
, plans go back to his old profession. “I want to go back to being nobody,” he told the London-based tabloid. “I’m going to flip houses like I used to. I obviously have talent at this and I have made money finding gems.”
Besides his own home, Parscale has at least one other Fort Lauderdale property on the market, a two-bedroom and two-and-a-half-bath luxury townhouse listed for $965,000 — not much more than the $895,000 paid for the place in May of 2018. As it turns out, Parscale’s real estate agent for both properties, Katrina Campins of

The 23 Best Fashion Books For Your Closet and Coffee Table

Stella McCartney and Cindy Sherman Team Up for a Bold New...