Home Woman On the bright side bringing colour home 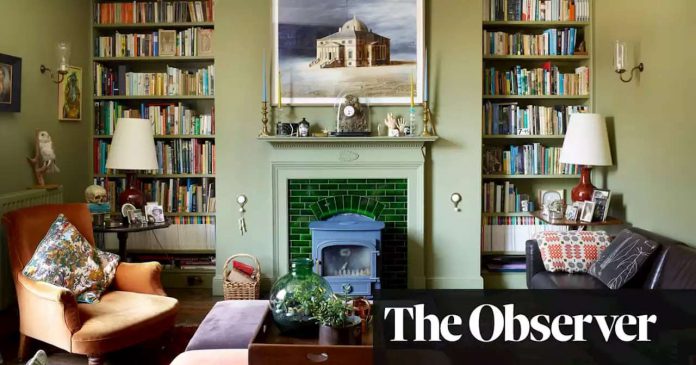 Perhaps it’s not such a surprise given the nature of her work, but artist Clare Woods is definitely not afraid of colour. The rooms and spaces in her family home in Hereford, shared with sculptor Des Hughes and their two children, pay testament to a love of a rich palette, from cornfield gold to olive green. The couple had renovated and decorated a number of homes over the years before arriving in this picturesque city on the border of England and Wales, and colour is very much Woods’s department.
“Des and I both know that he’s good at certain things and I’m good at certain things, so we let one another get on with it,” she says. “I do love colour and it’s something that I can actually feel quite confident about. With a Georgian townhouse like this, it’s very much about choosing colours one at a time for individual rooms, but at the same time I also like the colours to flow through the house and work together.”
The house itself, which dates from the early 18th century, reminds the couple of their days in Bath, where they both studied at the school of art. Afterwards, they continued their studies at Goldsmiths in London under Michael Craig-Martin. They lived and worked in east London, with homes in Dalston and then Leytonstone, and became part of the artistic circle centred on that part of the capital. But, eventually, with two young children, they began thinking about another move to a place where they could have more space and step away from some of the pressures of daily life in London with a young family.
“It was all about living space and head space,” says Woods. “I had started going out to Herefordshire to take photographs of landscapes that I would then paint, and I really liked the border territory. I started following the Leominster Morris group and liked the fact that they were dancing in this landscape and that their work was based on handed-down stories and a layered history. That was the beginning of our relationship with Herefordshire.”
Woods and Hughes decided to take the plunge, along with their son Sid, who is now 16, and their daughter Stripey, 12. At first, they lived in a relatively remote farmhouse with a couple of acres of land, before deciding that they had gone a step too far. Hereford, on the other hand, offered an opportunity to connect with a very different and more peaceful urban setting, while also being in reasonable reach of London. Having noted the delights of the Georgian houses near the cathedral, they bought their townhouse in 2013.
“It was once owned by the cathedral and was used by the cathedral school as a boarding house and then as the headmaster’s home,” Woods says.

“So we have a view of it from where we are. A lot of people know the house through the school and had done confirmation classes in the dining room. About five years before we moved in, someone had bought it and done a lot of basic renovation work, so there was a new roof and the basement had been tanked. But it was like a rental house with magnolia walls everywhere, grey nylon carpets and a very shiny white kitchen.”
The couple’s key priorities were loading the house with their extensive library of books and getting some colour on the walls, while embracing the original period features that give the house so much character.
“The gold colour in the dining room is one of my favourites,” says Woods. “It’s called Kitchen Gold by Craig & Rose, who I use a lot. What we tend to do is paint everything in the room the same colour so the skirting boards, the window frames, the woodwork, the bookshelves are all the same colour as the walls. I would say that I have an aversion to white, so there’s no white woodwork.”
The use of colour in this way gives the spaces cohesion and also offers a simple backdrop for the family’s collections of art, books and personal treasures, as well as a good showing of midcentury furniture and lighting. The sitting room hosts two Robin Day sofas, along with a favourite Lucienne Day cushion, while a striking artwork by Ed Kluz forms a focal point over the fireplace.
Woods and Hughes remodelled and planted the courtyard garden, creating a private urban oasis, while the kitchen and bathrooms were left until last. Out went the shiny white kitchen and in came some colour, with Farrow & Ball’s Light Blue for the walls and the custom units, followed, some time later, by an island painted pink with Ashes of Roses from Little Green.
“We did the kitchen about four years ago, but couldn’t afford the island so we waited and waited. When we finally got it, I just knew it had to be pink. It was totally instinctive and not overthought. The garden alongside the kitchen had become very green and so I thought, we need some pink to work with the green and the blue.”
Stripey also has pink for her bedroom, along with a painting by Hughes over her mantelpiece. The master bedroom is turquoise, the bathroom a dark obsidian green. With the magnolia long gone, Woods and Hughes’s home is now full of life and colour. The surroundings might be calm, but this is still a house with a big personality.
clare-woods.com
Topics

Paul Simon to Play Hawaii for First Time in 50 Years

Trump Is Trying to Identify Protesters by Posting Their Pics on...