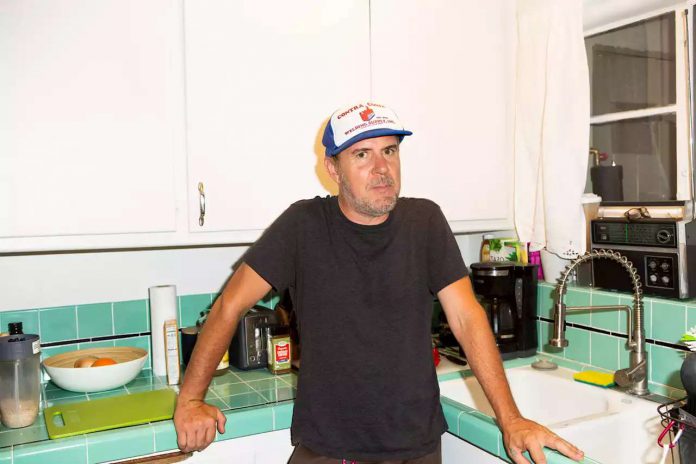 “I had to keep reminding myself: I’m not trying to win over a fanbase of 15-year-olds. It’s probably just a bunch of old Grandaddy nerds,” Jason Lytle says of reworking the album on a p…

30 Wild David Bowie Duets and Collaborations
“And then when the quarantine thing happened, and having access to the studios was no longer a thing, I was kind of scrambling, like ‘Oh God, what am I gonna do?’ Luckily I have a piano here in my living room, which is my beloved, favorite piano … The sound of it defies the size of it, and it just looks nice; it’s beautiful. And it’s very simple.”
The result is
The Sophtware Slump ….. on a wooden piano
— out Friday, November 20th
— a rerecording that strips the
Sophtware
songs of their buzzing ambiance and electronic flourishes and distills the tracks to their lyrics and melody.
“Right out of the gate, I was just like, ‘Oh, this is gonna be boring. Who wants to listen to piano versions of these songs,’” Lytle says of the experiment. “Once it started unfolding and [I] realized it wasn’t completely boring, I wasn’t going to limit myself just to the piano/vocal thing. I started extra vocals and little embellishments and stuff to where I thought, ‘I’m not cheating here, I can do whatever the fuck I want.’”
The piano arrangement lends extra poignancy to “The Crystal Lake,”
Sophtware
’s catchiest and most enduring track, a tale of homesickness where the protagonist regrets abandoning solitude and the simple life for a modern city filled with fake trees and “parties full of folks who flake.”
The “wooden piano” version of “The Crystal Lake”
excises the original’s seesawing synths, slows the pace and thrusts Lytle’s aching vocals to the forefront.
“I think I’m so fascinated and often so preoccupied by production and how things are gonna fit in the mix and not wanting to bore people that I’m always tucking the vocals back a bit. I like the idea of them living equally with all the instruments. I’ve never been a vocals-way-up-front kind of guy,” Lytle says. “So that was fun, to hear the words, and I think a lot of people will pick up on lyrics and words that they had no idea existed before; poignant moments that maybe slipped by.
“By the time I got to
The Sophtware Slump
— not that I ever just phoned in lyrics, but I finally got a little bit better at them — and I realized the power of getting the words right, really beating yourself to making sure you get the words right. I thought, ‘I can’t sing shitty words over and over and over again.’”
Released at the intersection of dial-up and broadband,
The Sophtware Slump
’s lyrics juxtapose the World Wide Web and real personal connections, Silicon Valley and actual nature, humans and humanoids, antiquated machinery and cutting-edge technology.
“I accidentally predicted Google Earth,” Lytle says of similarities between the satellite imagery program and the prescient
Sophtware
track “Miner at the Dial-a-View,” a somber tale about a laborer digging for ore on a distant world.
“He goes into a bar and puts money in [a machine that resembles tabletop video poker] and punches in the coordinates on Earth of his house, so he’s looking at his house and he sees this other dude pulling into the driveway and hanging out with his wife,” Lytle says of the track. “So that’s what the song is about, and [years later] I was just like, ‘That’s fucking Google Earth.’ So maybe somebody working at Google is a Grandaddy fan and owes me some money.”
For
on a wooden piano
, Lytle spent roughly three or four days working on and rehearsing each track; some songs — like the ones he played on a pre-coronavirus solo piano tour — came easier, with minimal takes required. Other tracks, like the long-unperformed “Broken Household Appliance National Forest” and the album’s layered, repetitive eight-minute opener, “He’s Simple, He’s Dumb, He’s the Pilot,” posed more of a challenge.
“The very last one [I recorded] — that I really, really dreaded — was ‘He’s Simple, He’s Dumb, He’s the Pilot.

I’m always afraid of boring people; I’m afraid of people falling asleep and just switching the off button … So starting the album off with this eight-minute song is one thing, but when it’s done in piano form, I’m like, ‘People are not even gonna get to the second song.’ So I was really concerned about that,” Lytle admits.
“I had to keep reminding myself: I’m not trying to win over a fanbase of 15-year-olds. It’s probably just a bunch of old Grandaddy nerds.”
While the music changed for
…..on a wooden piano
, Lytle’s Neil Young-like tenor — always an anomaly exiting his rough-hewn exterior — hasn’t diminished, with the singer only needing to drop the key on one track.
Lytle did have help from an unlikely vocal coach: Norwegian new wave band A-Ha’s 2009 album
Foot of the Mountain
. “I have a Toyota truck and I have pretty much one CD that lives in my truck and it’s a particular album by A-ha. I sing to it. I’ve probably played this CD like 300,000 times; it’s my vocal exercise,” Lytle said, adding of that band’s skyscraping vocalist Morten Harket, “He’s one of my favorite singers, and he can do all this acrobatic stuff. I try to dial into that. I go to the studio that I work at here, it takes about 10 minutes to get there, and I sing along with that CD. By the time I get there, my voice is right where it needs to be.”
Another singer long-championed by Lytle, the Irish vocal deity Enya, has also experienced a critical renaissance over the past year. “I read
this really in-depth [article]
… and I was really disappointed I wasn’t a part of it. I was in Ireland and we tried to go find her. I was gonna be that guy outside of the gates of her big castle compound,” Lytle said.
“She just created her own thing. People say that about ‘Weird Al’ Yankovic too. If you want ‘Weird Al’ Yankovic, you go right to ‘Weird Al’ Yankovic, you don’t go anywhere else. She made her own thing. And it’s this beautiful, spooky, enigmatic thing, like, ‘Where the fuck did this come from?’ I love her so much.”
Following the 20th anniversary reissue — which,
, also contains two discs of rarities in addition to the original LP and
wooden piano
version — Lytle plans to complete work on his next solo album before turning his attention to the next Grandaddy album, the follow-up to 2017’s 11-year-hiatus-ending
Last Place
.
“I am just embarking on a new album of my own; it’s gonna be under my own name, but right after that I’m starting on a new, very big, comprehensive Grandaddy record; I’m not gonna call it the last [Grandaddy record], it’s gonna be the most comprehensive-sounding, and it’s gonna be tied in with a documentary,” Lytle says, adding that when determining what song goes to what project, “At this point, the best shit becomes Grandaddy stuff. I reserve the stuff that I consider to be potentially phenomenal and designate that Grandaddy; the stuff I have really high hopes for.”
Razed to just vocals and piano, the “wooden piano” version of
The Sophtware Slump
reinforces just how cohesive — musically, lyrically and sequentially — the original set of songs were. Still, despite the sci-fi underpinnings and Y2K anxiety that courses through it, Lytle denies that the LP is a concept album, at least intentionally.
“I was just working on instinct,” Lytle says of the album. “Say you go to a therapist, and they’re watching you on levels that you’re just not aware of. There’s all this other shit going on.

They know what your deal is before you even do, and you’re revealing so much just by spewing. So the idea is just to spew, and that album, it was very instinctual; a lot of spewing. It could very well be a concept album, but if it is, I’m not really aware. It may be existing on all these levels that are beyond my capabilities to dissect.”
In This Article:

I Rubbed Volcanic Ash Mud All Over My Body and My...

How Do You Raise Gentlemen in This Aggressive World? – Laurie...