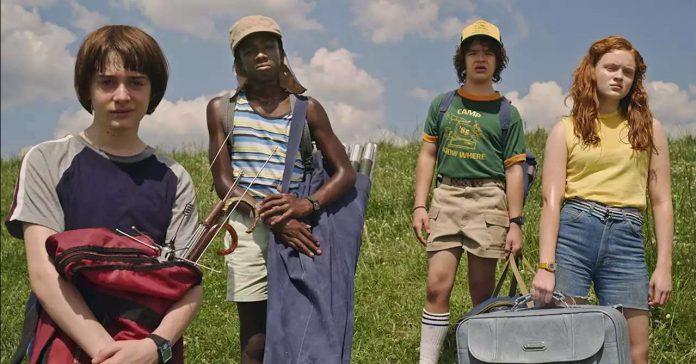 Things are getting dark in Hawkins!

. Joseph Quinn from
Catherine the Great
will play “an audacious 80’s metalhead who runs The Hellfire Club, Hawkins High’s official D&D club,” and that’s just the tip of the iceberg when it comes to new faces in Hawkins!
has also been spotted on set, though it’s still unclear who he’s playing in the latest installment.
Filming on
Stranger Things
season four has resumed (safely), though the team behind the Netflix series has yet to share a premiere date. We know now that
the show won’t end this season
, and that the Duffer brothers used the early months of the pandemic and quarantine to plan out the show’s trajectory and plotlines.

“Season four won’t be the end. We know what the end is, and we know when it is,” Ross Duffer said at the time. “[The pandemic] has given us time to look ahead, figure out what is best for the show. Starting to fill that out gave us a better idea of how long we need to tell that story.”
That means it’s unlikely that Englund’s character Victor Creel will turn out to be Freddy Krueger in disguise and destroy everyone in Hawkins, but we’re already terrified of what’s to come for Mike, Eleven, Steve, and the rest of the
Stranger Things

The best books to teach children about the environment

Meet ‘The World’s Most Comfortable Shoes’