Home Woman What Happens When Shoppers Refuse to Wear Masks? 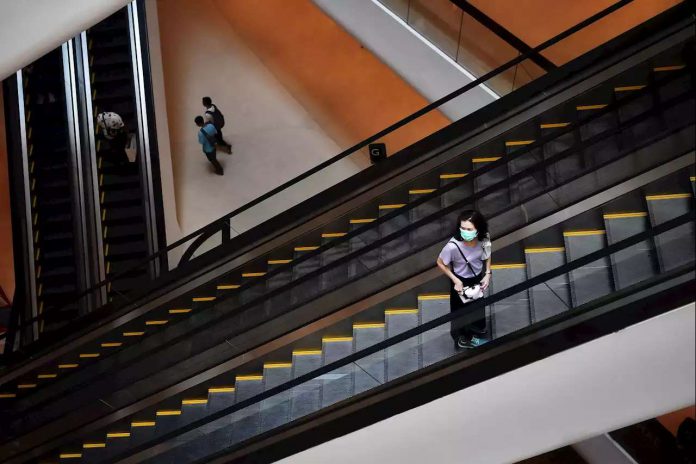 Fashion brands are getting dragged into a war with shoppers over wearing masks and other Covid-19 shopping precautions. Here’s how they should respond.

NEW YORK, United States
— At a Target in Arizona, a shopper threw an entire display of face masks to the ground. At a Skechers in Oklahoma, a customer threw shoeboxes at an employee who had asked her to put on a mask. At the King of Prussia Mall in Pennsylvania, shoppers tweeted photos of maskless crowds streaming past signs asking them to wear face coverings and practice social distancing.
As retailers cautiously reopen after months on lockdown, they are finding themselves on the frontlines of a new battlefield: enforcing safety measures meant to prevent the spread of coronavirus. In an industry where the customer is always right, brands are struggling with how to police behaviour in stores that would have been normal six months ago but now carry potentially deadly consequences.
Masks are the main flashpoint. A Pew survey in June found that two-thirds of Americans say they wear masks in stores all or most of the time. That leaves tens of millions of shoppers who don’t (and the survey didn’t ask whether those in the first group wear their masks below the nose, reducing their effectiveness).
In the UK, face masks were finally made mandatory inside stores on Tuesday, with shoppers subject to £100 fines for violating the rules. France is considering tightening its laws around masks too. Currently, they’re only mandatory on public transportation. In Southwest France, a bus driver was assaulted and killed last week by angry passengers who refused to wear masks.
The brawls that took place at Target and Skechers are rare. More often, stores introduce rules that shoppers simply ignore. Employees don’t feel empowered to order customers to put on a mask or to order them to leave if they refuse. Government guidelines vary from country to country, and within the US, state by state.
At the same time, consumers and retail workers are pressuring brands to be more proactive, as customers who fail to wear masks or follow social distancing guidelines put everyone else in the store at risk. Some retailers that relied on voluntary mask policies and friendly floor stickers to enforce social distancing are toughening up. Among major fashion retailers, though, mandatory policies are rare.
It’s just as important a business decision as a health one.
Some see a strict masks policy as better for their brands in the long run. Veja, for example, is barring maskless customers from entering its stores in New York and Paris, and has dedicated retail associates standing outside to enforce the rule.
“If they don’t follow the rules, and the numbers get higher … what will that do? We’d have to shut down again,” said founder Sébastien Kopp. “So it’s just as important a business decision as a health one.”
A Patch work of Rules
The science around masks is clear: wearing one greatly reduces the spread of the coronavirus, which has infected over 12 million people worldwide.
It’s often up to retailers to enforce their use, however. Only some US states require facial protection, including New York, Massachusetts and North Carolina. Elsewhere, including newer hot spots like Texas, Arizona and Florida, it’s up to cities and counties to set their own rules.
The discrepancies are causing confusion and contribute to shoppers’ lax attitudes, said Brian Dodge, chief operating officer of the Retail Industry Leaders Association, an American retail trade group. In early July, RILA, whose members include
Gap
Inc., Target, Ulta Beauty and Levi’s, wrote a letter to the National Governors Association asking that states make wearing face coverings mandatory. Last week, the American Apparel & Footwear Association sent a letter to President Trump asking his administration to”institute federal face mask guidelines to assist retail stores as the country continues efforts to safely reopen.”
The strongest outcome will be if the government steps in.
“It’s important for customers to know what’s expected of them, and there shouldn’t be any guessing,” Dodge said.