Home Woman Everything You Need to Know About Southern-Style Dressing 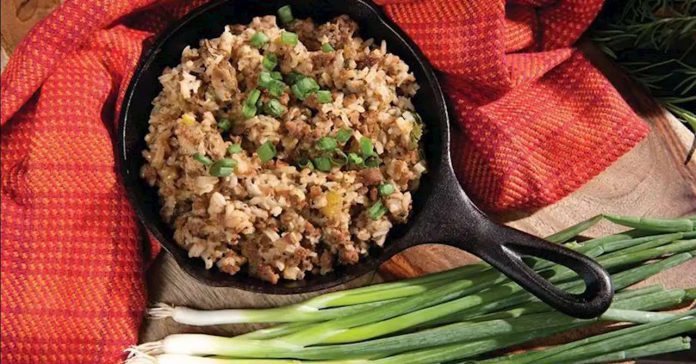 Facebook/Rouses Markets
Turkey gets all of the attention, but the real hero of the Southern Thanksgiving meal is dressing, the perfect savory embodiment of fall. Those who are quick to call this dish “stuffing” may be confusing it with the similar side dish, baked inside the empty cavity of a turkey. While the resulting product may be flavorful, it ultimately lacks texture and may make some of your more squeamish dinner guests —
and anyone from the USDA
— a little nervous. Dressing, on the other hand, gets its own pan, which allows for a crunchier surface to compliment the soft interior, plus the flavor bonus that comes with caramelization. Still not clear on where to draw the line between dressing and stuffing? Read on for a definitive guide to Southern dressing.
Why isn’t it stuffing?
First and foremost, because this writer is a proud Southerner, born and raised in Birmingham, Alabama, and currently living in Atlanta. Those of us progressives from the South recognize that our region’s past has included some dark moments, to say the least, but we’re staunch in our beliefs when it comes to foodways. Dressing is dressing, because that’s what we believe.
A revised edition of
offers this explanation
: “The terms ‘stuffing’ and ‘dressing’ are used interchangeably despite the occasional argument that anything cooked in the bird is stuffing and anything baked separately must be called dressing.” The authors continue, “Stuffing is actually the original name, and the term ‘dressing’ came from Victorian England when ‘stuffing’ was thought to be a bit unseemly.”
These days, “stuffing” is fine if referring to a dish cooked in the turkey’s cavity. But doesn’t “dressing” make more sense if the ingredients aren’t actually stuffed into anything other than the diner’s face?
/Facebook
How is dressing prepared?
As long as you follow a few basic guidelines, the dish is a canvas for your own personal interpretation. A
standard dressing
, which marries cornbread, chicken stock, eggs, celery, onion, and seasonings, can be augmented with fall staples such as pecans, mushrooms, apples and pork sausage, or oysters. Frank Stitt, chef/owner of Highlands Bar & Grill, Bottega, and Chez Fon Fon in Birmingham and godfather of the city’s now-buzzing culinary scene, had Southern gourmands chopping up turkey hearts and gizzards for his giblet dressing recipe long before anyone knew what “offal” meant.

As for the necessary components, John Currence, the James Beard Award-winning chef and restaurateur behind City Grocery, Bouré, Big Bad Breakfast, Snackbar, and Lamar Lounge in Oxford, Mississippi, tells Eater a specific savory profile is in order: “It needs lots of celery, lots of onion, and lots and lots of sage to make a plain, traditional turkey dressing. Without sage it falls flat. That’s the headliner for me.”
And don’t even think about using store-bought bread crumbs. If you want good dressing, you’re making your own cornbread. “They have these dehydrated cornbread crumbs — to make a real good cornbread dressing, you’ve got to make your cornbread from scratch,” Currence says. “You might let it sit overnight, you might crumble it a little bit so it dries out — I like fresh-made cornbread for my dressing.”
Currence makes two versions for his family’s Thanksgiving table, a standard cornbread for those with tamer palates and a modified take on the oyster variety. “I’ll make a huge pan of oyster dressing that’s full of Pernod or some sort of Anisette, cayenne, and I’ll even put a little pureed spinach in it so it’s a weird kind of Oysters Rockefeller-y dressing.”
/Flickr
What do you eat it with?
Turkey, of course. But, it should be paired with an array of other hearty side dishes: sweet potatoes, green bean casserole, and the like. And don’t forget the cranberry sauce, which is another of Currence’s required Thanksgiving comestibles, even though he doesn’t really like it. Smothering dressing with gravy is perfectly fine and left to individual discretion, but a well-done version won’t be dry and will stand up on its own.
Is dressing essential for a proper Thanksgiving meal?
“Well, I don’t know,” Currence says with a not-so-subtle tone of sarcasm. “Do you have to have peanut butter on a peanut butter and jelly sandwich?”
Yes, it’s essential. Go to 10 different houses serving classic Thanksgiving meals, and you might find 10 different menus of side dishes to go with the main attraction. But, every table will include some sort of dressing.
“I think it’s an integral part of the meal as the turkey itself,” Currence says. “Those are sort of the one-two of the Thanksgiving meal. You can’t have Thanksgiving without it as far as the traditional definition goes.”
What are some good dressing recipes?
•

Last-Minute Father’s Day Gifts That Will Arrive On Time