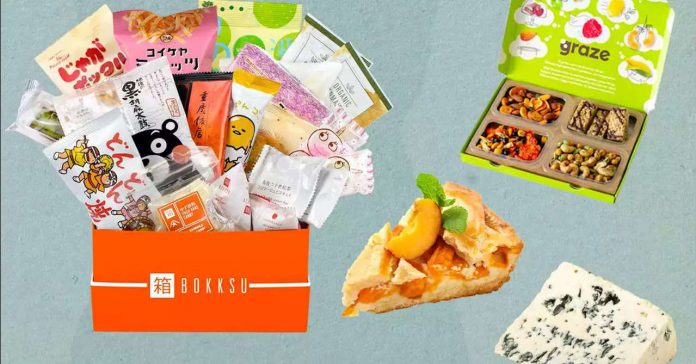 From Japanese candy to imported cheese, there’s a subscription box out there for everyone

Classic Bokksu subscription: $36.99/month
I’m obsessed with cute stuff, so when I opened up Bokksu’s Autumn of Kyoto
box, I got a crunchy hit of dopamine like nothing I’d ever experienced. Bokksu is a Japanese company that works with regional foodmakers to ship Japanese-made snacks all over the world. Every month, Bokksu has a new theme; Autumn of Kyoto featured itsy
yatsuhashi
cinnamon crackers, a yuzu jelly bar, tiny star-shaped rice crackers, and even a matcha chocolate stick cake manufactured under a label called “Cute Selection.” Damn right! Bokksu keeps its theme a mystery month to month, and its design and cohesion among the many snacking options is one of the most thoughtful boxes out there.
If, like me, the recipient isn’t a Japanese speaker, but they are prone to low blood sugar and thus need to have comprehensible snacks in a tote bag at all times, Bokksu comes with a full-color guide book that explains the labels, the history of the snack theme, plus some useful Japanese phrases.
Meat & Cheese Club subscription: $250/6 months, $125/3 months
On the days after school I wasn’t eating a room-temperature
pizza bagel
that my mom picked up for me at Einstein’s, or preparing my specialty “boil-in-bag rice with soy sauce and butter,” I would make myself a little meat and cheese plate. It was a 3:30 p.m. cocktail party for just me, with no guests and only tap water to drink.
Zingerman’s in Ann Arbor, a specialty deli with a cult following thanks to its early adoption of a country-wide shipping model, sends its tasty selections all over the country, unearthing hard-to-find domestic and imported cheeses and meat spreads via a theme each month. Zingerman’s offers several snack packs, including the Frequent Fish Club, the Coffee Cake Club, and the Quarterly Bacon Report Food Club, but its meat and cheese subscription box allowed me to relive my earliest days of snacking alone. The message on the pretty paper-wrapped Piace Vecche slab I received promised a little taste of a parmigiano-type cheese — but it was like nothing I’d ever tasted before.

I ate half a pound of it in a day. I grew ill. I still recommend it as a gift to any friend who doesn’t need glitz, glamour, pomp, or circumstance, but loves cheese.
Mouth’s Indie States of America
Indie States of America subscription: $60/month for 3 months, $54/month for 12 months
This snack box is for all the girls out there who write strongly worded emails to customer service email addresses but still consider themselves punk as hell. That’s me. The Indie States of America box is comprised of fun little snacks from small distributors, like solar-popped
Bjorn Qorn
dusted in nutritional yeast, pineapple mojito jerky, and a watermelon margarita mixer I initially thought to be a melon-flavored cold brew. Still good!
I don’t like wacko snacks that exist purely for spectacle. This is the right subscription box for your friend who watches the
Bon App
test kitchen videos as she falls asleep, but doesn’t deign to follow novelty milkshakes or burgers on Instagram. These snacks were all the right kind of weird, plus the first box came with a cute tote bag that I will be sure to ball up real tiny inside of another tote bag and lose for months at a time.
Goldbelly Pie of the Month
Monthly pie subscription: $49/month
When I was a young cub reporter at this very website (I didn’t so much do journalism as write the tweets),
I once commented on a post
to say that pies with hot fruit were disgusting. Several haters in the forum came at me asking how I got this job with an opinion like this. Well the joke’s on them, because I have no idea how I got that job! I was like 12 years old!
I stood by this pie opinion, that is until Danny Meyer’s regional food delivery service Goldbelly sent me an
Elegant Farmer
apple pie baked in a bag that I hadn’t had since my midwestern youth. It is the perfect pie, the perfect snack, and you can even eat around the apples if you want. I also got to try a condensed milk and butterscotch creation by

David Walliams has the best reaction after reuniting with his mum...