Home Woman Experience I fell in love in an Uber 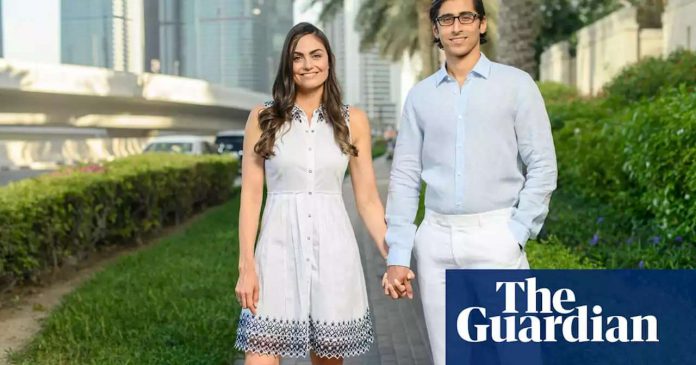 Fri 25 Dec 2020 10.00 GMT
I
t was a beautiful spring day in Manhattan in May 2016. The air was crisp and the skies were blue, so I decided to walk across town to meet a friend for lunch. I had gone only a few blocks when what felt like a tornado hit: my light coat was no match for the heavy rain; my hair blew in 10 directions, and garbage hit me in the face. I tried to hail a cab, but there weren’t any. Uber prices were surging, so I decided to take a punt on an UberPool (you could end up travelling with a stranger, but there’s a discount). I hoped nobody would get in to join me on the short trip.
The cab pulled around the corner immediately. I jumped in to find a tall, handsome stranger sitting in the back. My heart started to race. I casually glanced in his direction before smoothly sitting down beside him (or so I thought; if you ask him about it now, he says I straight up stared at him).
We started talking. He told me tales of debauchery from a recent boozy trip to Puerto Rico. His hedonistic lifestyle was a turn-off; I’m a nutritionist and don’t drink much alcohol. But then conversation turned to his plan to join his family business, his love of triathlons and healthy living. OK, I thought to myself, I could like this guy. Ten minutes later, the journey was over. He asked for my number and introduced himself as Kush.
That evening, I had a date with a guy I’d been seeing for six months or so. It was a typical noncommittal New York setup: casual with no labels, meeting once a week. The next morning, I called him to tell him it was over. I needed to focus on my new man.
I spent that evening with Kush, after he invited me to his business school graduation party. Once we left, we sat talking in a cafe until 3am. We connected right away: we both love the outdoors, and are close to our families. I, like him, grew up struggling with my weight and acne. We have totally different backgrounds – I’m Italian-American born and raised in New York; he’s Indian, but grew up in Dubai. Yet something clicked.
In the past, I’ve found dating in New York to be frustrating; people fear commitment in case someone better comes along.

With Kush, it was different. We didn’t play games or wait for three days before texting. Things felt natural.
There was one problem, though: Kush was leaving. With graduate school over, his ticket back to Dubai was booked for July. We knew there was no future, so jumped right into making the most of every moment. We saw each other at least once a day. He ended up extending his stay by a month, to play out our summer whirlwind romance. As his departure date grew closer, neither of us wanted it to end.
We decided to give long distance a go, but it felt impossible. The time difference was a struggle, and meeting was difficult; by November, we met in New York to say our final goodbyes. Except, of course, it was a magical weekend. We came up with new ground rules, and agreed to give it one final go.
Read more
In July 2018, Kush was visiting New York again. He insisted we head to Central Park one Saturday morning for an early jog. It was cold, so I asked for his hoodie. Uncharacteristically, he said no. We finished our loop, and then walked to
Bethesda Fountain
, the most beautiful part of the park, and our favourite spot. He got down on one knee, pulled a ring box from his hoodie, and proposed. Of course I said yes.
It’s crazy to think how one chance car ride threw my life in a totally different direction. We had a civil marriage ceremony in Central Park in October 2019, with plans for a big wedding in Dubai this March which, for obvious reasons, we had to cancel. Now we live together in Dubai, where I run my nutrition business.
What if my friend hadn’t asked me to go to lunch that day? Or if the weather had deteriorated five minutes earlier? What if I’d insisted on walking through the rain? It’s funny; although I would take UberPools from time to time in New York, it was the only one Kush has taken. I like to think that our meeting was somehow written in the stars.
• As told to Michael Segalov.
Do you have an experience to share? Email

Choose Your Own Murderous Adventure Which ‘Big Little Lies’ Lady Are...

21 People at NYC Pride Share the Stories Behind Their Powerful...