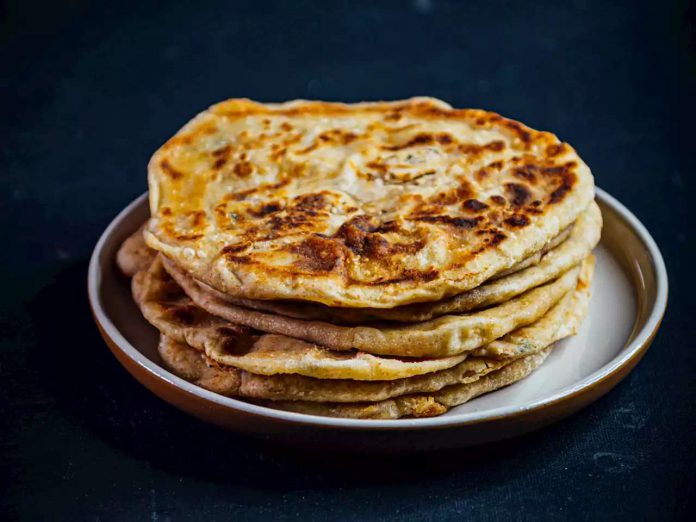 These crisp yet tender Indian flatbreads are stuffed with a spiced mixture of mashed potatoes, then griddled until crisp outside and warm within.

parathas
, the flaky flat breads eaten in India and many other parts of Southeast Asia, but the stuffed ones are my favorites. It doesn’t matter if they’re stuffed with a mixture of spiced mashed potatoes, as in the recipe for aloo paratha I’m providing here, or they’re stuffed with mixed vegetables or shredded cheese; I love them all.
Parathas are as diverse as their fillings, textures, and even the techniques used to build them. They can be eaten for breakfast, lunch, dinner, or a snack—there are no rules here, and no one should judge you for how you enjoy them. My only motto is to eat them whenever you want but to make sure you enjoy them warm.
While I’m quite fond of parathas, I haven’t always been able to produce good ones. When I first arrived in the United States, my early rounds of paratha-making ran into a lot of trouble, particularly when I used any flour other than atta, the whole wheat flour used in India to make flatbreads like rotis and parathas. Atta is available online and in Indian grocery stores, but depending on where you live, it may be hard to find. And even if you can find it, I’ve sometimes come across bags of atta that have an off smell, indicating that they’ve started to go rancid. Consequently, the recipe I’m sharing today gives you the option of using atta or a blend of all-purpose and whole wheat flours, which are more commonly available.
I later learned that there are several reasons why my early attempts to make good parathas failed, and they mostly have to do with the types of flour I was using.
How Atta Is Different From American Flours
While flours made from different types of wheat have different properties, which you can read about
in the Serious Eats guide to flour
, for paratha-making, the properties I want to focus on are the size of the bran contained in the flour and something called”damage starch values.” During the milling process, whole grains are broken up as they pass through various rollers, after which the endosperm, bran, and germ can be separated out. But something else happens during the milling process, namely the starch granules inside the grain can also become damaged.
The degree to which the starch granules in the final flour are damaged can drastically affect the way the flour behaves when combined with water. For example, an intact starch granule can absorb about 40% of its weight in water, while a damaged starch granule can absorb up to more than 300% of its weight in water. Scientists who study grains and flours measure this using a parameter called the damaged starch value. Wheat flours with higher damaged starch values will absorb a lot more water and, consequently, they’ll produce more pliable doughs and experience more starch gelatinization; they will also turn rancid much faster, and are more susceptible to degradation through enzymatic activity.
As I noted above, in India, parathas and other flatbreads like rotis and chapatis are made from atta, a stone-ground whole wheat flour typically made by passing hard wheat through manually run machines known as chakkis (large-scale commercial manufacturers use automated machines). Atta has a damaged starch value in the range of
13% to 18%
, which is much higher than American wheat flours, since atta is made from harder wheat and is consequently milled using more force and goes through several rounds of milling. In comparison, American flours milled from hard wheat typically have a damaged starch value that ranges between 6% and 12%, while those milled from soft wheat typically have a damaged starch value between 1% and 4%.
The different milling process also accounts for the fact that the size of the bran particles in atta is much smaller than in American wheat flours. The size of the bran is important for paratha-making because bran interferes with gluten formation; when kneading a dough, bran particles will end up cutting the strands of developed gluten, reducing the dough’s elasticity and increasing its extensibility, thus making the parathas easier to form.
Given these differences, my attempts to make parathas using American flour were always destined for mediocrity, if not outright failure, because the recipes I used were intended for use with a whole wheat flour with a much higher damaged starch value and smaller particles of bran.
A Flour Blend to Approximate Atta
In my initial experiments with making parathas without atta, I ran into a couple of issues: Parathas made with all-purpose flour were very elastic and didn’t hold their shape well, and those made with American whole wheat flours ended up unpleasantly tough. Based on the information I learned about damaged starch values and bran, I realized I needed to come up with a ratio of all-purpose to whole wheat flour to produce a dough that was comparable in texture and flavor to a dough made with just atta. I say “comparable” here because there isn’t any good way to produce a flour mix that’s similar to atta using commercially available American flours; I can’t change their damaged starch values, as they’re already ground, and I am not about to mill my own atta at home.

However, I could address the difference in bran size by simply using less of it in my flour mix.
I eventually ended up with a 3:1 ratio of all-purpose to whole wheat flours, which forms a dough that holds its shape, has good chew, and enough whole wheat flavor and aroma to approximate a dough made with atta.
The Role Fat Plays in Paratha Dough
Aside from flour and water, fat is an integral component of paratha dough. When mixing the dough, rubbing the fat into the flour helps to regulate gluten development by coating some of the glutenin and gliadin proteins, preventing them from combining with water to form gluten, thereby keeping the resulting parathas more tender (for more on this, read
this article about how gluten works
).
But fat also plays an important role in giving parathas their characteristic flaky texture. Just like puff pastry, when parathas are rolled out, the dough is lightly greased with a little fat and folded over itself to create multiple layers; this is called lamination. When the dough is cooked, the water in the dough produces steam, creating air pockets between each of those layers. While there are typically more layers in a plain paratha than a stuffed paratha, stuffed parathas are still greased with a little oil before the filling is added to create the same effect.
The choice of fat can be important, too, particularly if the parathas end up being consumed at room temperature (which, again, I don’t recommend, but it’s perfectly acceptable). Since ghee turns solid at room temperature, parathas made with ghee will be a bit firmer when cool than those made with a neutral oil like canola or grapeseed oil.
Essential Techniques for Making Paratha
Kneading
Usually parathas are kneaded by hand in a large bowl. My method uses a stand mixer, and you will need to use both the paddle attachment and the dough hook to get the dough to come together and then knead it. While the kneading step is very straightforward, its duration will depend on which flour you choose to use. If you use atta, you will want to knead the dough in the machine for longer than you would if you use the combination of all-purpose and whole wheat flours, to get the right degree of elasticity so the dough rolls out well and holds its shape.
Resting
Rest the dough for at least 30 minutes at room temperature, as the gluten needs time to relax. If you don’t wait, the dough will be difficult to roll out and will be very recalcitrant and stiff. If you like, you can make the dough a couple of days ahead of time and store it well-wrapped in plastic wrap in the refrigerator, to keep it from drying out. If you do make it far in advance, be sure to take the dough out and let it come to room temperature before proceeding with rolling it out, about one hour.
Folding and Rolling
While stuffing parathas is a relatively straightforward process, it can take a few tries to get the hang of it. For these aloo parathas, place the potato filling in the center of a rolled-out piece of dough, leaving a 1-inch (2.5-cm) gap along the outer edge, then wrap the filling with the edges of the dough and fold them to form a flat disc or a small rectangle. Once the seams have been pinched close, the stuffed paratha can then be rolled out to form a circle or circular rectangle.
With respect to the quantity of filling in each paratha, my opinion is more is better. But because it takes a little practice to stuff a lot of the spiced potato mixture in the bread, my recipe amounts give you a bit of wiggle room.
Cooking the Parathas
When cooking the parathas, the lower the heat you use, the better. If the pan is too hot, the bread will blister very quickly and will develop bitter-tasting charring while the interior remains uncooked; if this happens, it’s best to allow the pan to cool before trying again. Also, I recommend carefully wiping the surface of the pan down with a wadded paper or cloth towel after each paratha is cooked and before adding more oil, otherwise bits of the dry flour left behind will accumulate and burn over time, which can also leave a bitter coating on the bread.
Serving and Eating
Personally, I prefer to eat parathas straight out of the hot pan, which is when they’re crispiest. However, when I’m cooking for people other than just myself, I’ll wrap the cooked parathas in a kitchen towel and store them in a thermal insulated container to keep them warm.
Aloo parathas really don’t need any accompaniments, nor do they need to be served as a side to go with some main dish. I usually eat them with some plain unsweetened yogurt and an aachar, or Indian pickle, of some kind. If I’m in the mood, I might serve them with a salad of onions, tomatoes, and cucumbers, known as kachumbar, but they really are perfect served all by themselves.
Why It Works
A blend of all-purpose and whole wheat flour approximates the flavor and texture of parathas made with atta, an Indian whole wheat flour.
Adding oil between the layers of the dough yields a flaky texture.
Cooking the parathas over gentle heat ensures a browned and blistered exterior and a fully warmed-through interior.

Which Astrological Signs Are Viewed Most Negatively?

Slideshow Lyme Disease What You Need to Know About Symptoms Causes...