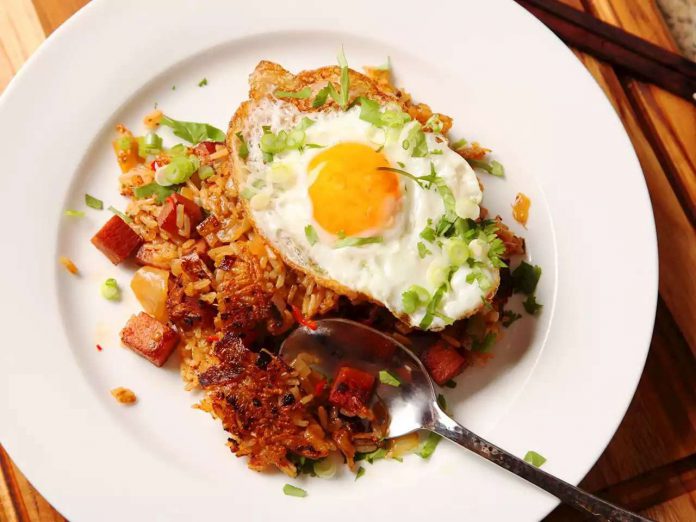 Whatever the provenance of the can of Spam I found hanging out in my pantry, I knew its destination: Add to it an egg, an onion, and a few other aromatics, and I had everything on hand to make myself a big ol’ plate of the ultimate Korean-American late-night drunk food: kimchi and Spam fried rice. This is the kind of stuff you eat while swaying gently over the kitchen counter in your underwear.

What’s New On Serious Eats
To start, I drain away as much of the kimchi juice as possible into a bowl, pressing on the cabbage to really force it out. The reason is that we want to sauté the kimchi and give it a little flavor, and any excess moisture will inhibit that. Don’t worry, we’ll use it all again later on.
Next, I start stir-frying, beginning with diced Spam. Even though Spam is packed with fat, you need a little oil in the pan to get it started. I cook the Spam until it’s crisp, then add chopped onions and the chopped kimchi, stir-frying it all together until the onions are softened and the kimchi is just starting to brown a bit around the edges. I then transfer everything to a bowl to empty out the wok.
With a Western range, there’s simply not enough heat input to allow you to cook everything simultaneously, so cooking in batches is the way to go, including with the rice. When I first made this, I was using day-old rice, so I broke it up by hand before adding it to the preheated oil in the hot wok. With fresh-cooked rice, there’s no need to break it up before adding it.
I cook the rice in two separate batches, then add them both back to the wok, leaving a little space in the center for my aromatics: scallions, garlic, and thinly sliced hot chilies to double down on the heat from the kimchi.

As soon as they’re fragrant, I return the kimchi/Spam mixture to the wok and toss it all together.
Now we get to seasoning. The kimchi juice is the first step, and with high enough heat, it should sizzle and dry up pretty rapidly. I also use a big splash of fish sauce, a touch of toasted sesame oil, and a ton of ground black pepper. Sesame oil and ground black pepper go together like Bert and Ernie, if Bert and Ernie tasted way, way better than they do.
Here’s the real trick: letting that rice sit in the wok without moving it. The idea is to create a crisp, charred fried-rice shell, like what you’d find in the bottom of a good paella or a
dolsot bibimbap
.
It’s the textural element and toasty flavor that push this over the edge, from”this is pretty good” to”please don’t talk to me while I’m eating this”–level stuff. Top it all off with a crisply fried egg and some hot sauce, and…I’m not even sure what territory we’re in, but it’s a good place to be.
Whether it’s first thing in the morning or late at night, any time that you’re typically in your underwear is the right time for kimchi and Spam fried rice. It’s time to rock out with your wok out, or maybe chow down with your pants down. Or both. Or neither. I’m too tipsy and hungry to care, really.
Get the Recipe

Stacey Solomon in hysterics as Joe Swash forced to sleep in...

Harry and Madison from ‘Too Hot to Handle’ Had a Secret...