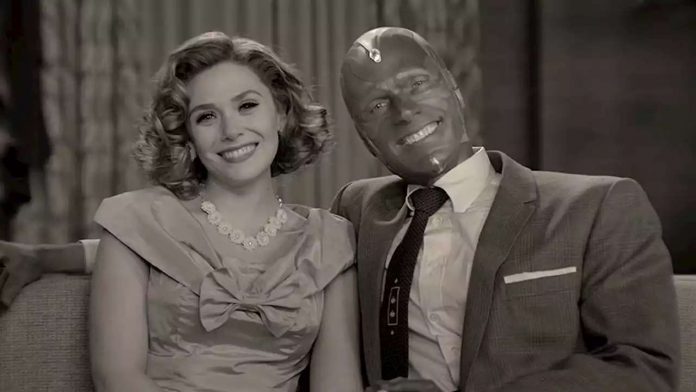 Kevin Feige looks at the landscape as he embarks on Marvel’s Disney+ journey with ‘WandaVision’ and weighs in on the fate of Netflix’s MCU characters.

centers on
Avengers
heroes Wanda Maximoff (Elizabeth Olsen) and Vision (Paul Bettany), living in 1950s sitcom-inspired suburban bliss until they begin to question their picture-perfect lives together. It’s Marvel’s most off-beat project yet and by far its smallest, following the sprawling, 23-film saga that saw
Avengers: Endgame
(2019) crowned the highest-grossing film of all time.
Feige believes that by going to the small screen, he can still make a cultural impact akin to what Marvel is accustomed to.
”
Mandalorian
has proven that team and that platform can hit the cultural zeitgeist in a way that our films have as well,” Feige says.
Feige is the highest-grossing film producer of all time with a global haul of $22.55 billion. While he will not be getting box office receipts with
WandaVision
, he says he is feeling excitement and nervousness similar to an opening weekend. He is also looking to answer the same questions.
“Does the audience enjoy it? Did it meet or exceed expectations? Did it subvert expectations? And are they still thinking about it and talking about it weeks or months or years after they’ve first seen it?” says Feige.

The specific barometers for success are very different in streaming than they are in box office, of course, and I’ll leave that to the experts at Disney+ to know what their formulas are.”
Though Feige might be privy to those formulas, observers can expect to learn very little about the performance of the show for Disney+, which has followed the Netflix playbook and opted not to widely share metrics around the performance of its streaming films and TV shows. Third-party measurement, however, shows just how much is at stake with the
WandaVision
release for Disney+, which thus far has relied heavily on its catalog of new and classic films to attract subscribers. According to data from Antenna, the filmed version of Broadway musical
Hamilton
and Pixar Christmas release
Soul
have been the two biggest drivers of sign-ups. The only series to make Antenna’s list was
The Mandalorian

Dan Osborne admits he cheated on Jacqueline Jossa and brands himself...

Meghan Markle will celebrate her first US Mother’s Day on home...

Is the New James Bond a Woman?