Home Woman NHL Player Refuses To Give Up Until Little Girl Gets Puck He... 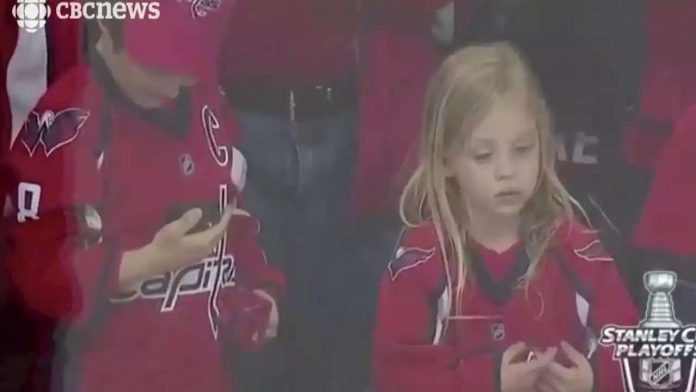 Link copied and ready to share!
Image via Twitter/CBC News: The National
Capitals hockey player Brett Connelly makes sure a girl watching the game got her puck
Washington Capitals right winger, Brett Connelly, spotted an adorable fan while the team was warming up before their Eastern Conference series game against the Columbus Blue Jackets and decided to throw her a puck. Unfortunately it took him three attempts to actually get the puck in her hands because the man catching them kept giving them to the boys instead.
Six-year-old Keelan Moxley was attending her very first playoff game on Sunday and was standing next to the glass in between a couple little boys when Connolly grabbed a puck and tossed it over the glass to her.

Unfortunately, a man standing behind the kids grabbed it and passed it to one of the boys. Connolly, frustrated, returned with another puck and the man
did the same thing again.
You may have seen the video of Washington Capitals’ Brett Connolly trying to give a little girl a puck, only to be intercepted twice by a man standing behind her. We asked Keelan Moxley for her side of the story.

I washed my face with seltzer

Kellyanne Conway Is Leaving The White House To Focus On Her...

With Joyride Everyone Can Host Their Own HQ Trivia