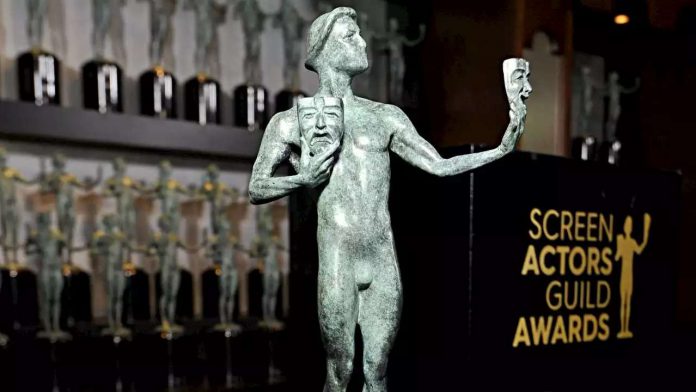 Now playing
SAG-AFTRA has changed the date of the 2021 SAG Awards after the Recording Academy announced they were rescheduling the GRAMMY Awards to March 14 — the same date as the SAG Awards’ original date.
The 27th Annual Screen Actors Guild Awards will now be simulcast on TNT and TBS on Sunday, April 4, at 9 p.m. (ET) / 6 p.m. (PT).  The nominations announcement will still take place on Thursday, Feb. 4, at 8 a.m. (PT).
Previously, SAG-AFTRA said in a statement that they were not pleased with the announcement about the GRAMMY Awards. The
Recording Academy announced on Jan. 5 that they would be rescheduling
this year’s GRAMMYs show to March 14 due to continued concerns about the COVID-19 pandemic. The original show was set to take place on Jan. 31.
“We are extremely disappointed to hear of the conflicting date, March 14th, announced today for this year’s Grammy Awards telecast,” SAG-AFTRA said of the decision in a statement to ET.”We announced the same date for the SAG Awards last July with the intent to give the greatest possible scheduling consideration for other awards shows. We expect the same consideration from sister organizations throughout the industry.”
SAG-AFTRA went on to note that it shares members with the Recording Academy.

“We are in contact with the Recording Academy and will continue to work with our sister organizations to find ways to make this year’s awards season as successful as possible,” the statement concluded.
Meanwhile, Harvey Mason Jr., Chair & Interim President/CEO of the Recording Academy; Jack Sussman, Executive Vice President, Specials, Music, Live Events and Alternative Programming, CBS; and Ben Winston, GRAMMY Awards Executive Producer and Fulwell 73 Productions released a joint statement, saying,”After thoughtful conversations with health experts, our host and artists scheduled to appear, we are rescheduling the 63rd Annual GRAMMY Awards to be broadcast Sunday, March 14, 2021. The deteriorating COVID situation in Los Angeles, with hospital services being overwhelmed, ICUs having reached capacity, and new guidance from state and local governments have all led us to conclude that postponing our show was the right thing to do. Nothing is more important than the health and safety of those in our music community and the hundreds of people who work tirelessly on producing the show.”
GET THE ET NEWSLETTER

How To Find A Therapist Who Focuses On Black Mental Health