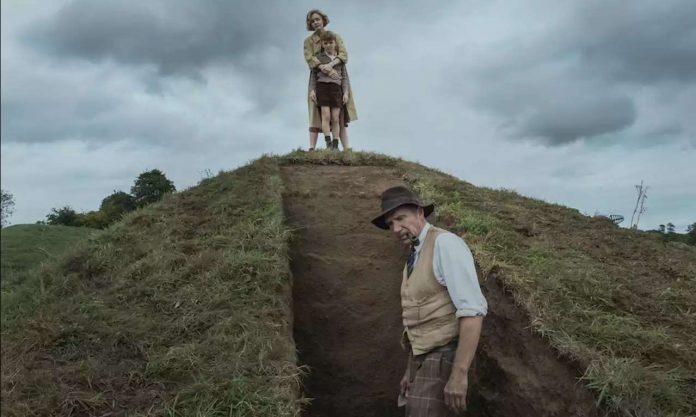 It started with a hunch. Edith Pretty and her husband bought a house at Sutton Hoo, the estate of which contained several large mounds of earth. For years, there had been theories about what might …

Ralph Fiennes
as amateur archaeologist Basil Brown (who was in fact slightly younger, 51, at the time). Mulligan conveys the inner strength in a slowly dying character, while Fiennes is surly and behind a thick Suffolk accent. Together, the pair explore a dynamic that is not at all romantic — though the possibility flares at one point — but instead treat audiences to an understated show of mutual respect that transcends education and class.
“The Dig” may have been inspired by a true story, but the age discrepancies do not necessarily matter to Simon or screenwriter Moira Buffini’s approach. Mulligan was no doubt cast for the same reason she accepted her role in last year’s “Promising Young Woman”: She’s among the finest actors working, and it’s a pleasure to watch her explore her range with varied and interesting parts. In any case, “The Dig” is not a work of rigorous history, even if rigorous history is one thread of its many themes. The film has been adapted from a novel by John Preston, which is told through multiple narrators, and indeed, the movie seems to shift its focus at times between three of them: Edith, Basil and Peggy Piggott (Lily James), a professional archaeologist who participated in the excavation and happens to be the author’s aunt (she later remarried and changed her name to Margaret Guido).
At various points, Stone and editor Jon Harris (an experimental chap who’s done some very aggressive work for directors Danny Boyle and Matthew Vaughn) disconnect the dialogue from the footage in which it is spoken, letting characters’ voices precede or otherwise float disembodied from audiences’ view of their sources, giving the film a dreamy feel. Combine that with slightly wide-angle shots of characters wandering through honey-colored fields or all but embracing in nature, and one gets a Terrence Malick-like feeling from the material, although the story is mostly linear by comparison.
“The Dig” is mostly concerned with the politics — sex and class, of course, but especially those of the experts and museums vying for a claim — of the Sutton Hoo operation. It is not especially interested in the treasure itself. The film opens with Basil’s arrival at Sutton Hoo House, where Edith tells him of her hunch. “I have a feeling about this one,” she says, standing atop the now-famous mound where the ancient vessel will be found.

Basil did not actually begin with that hill, nor was he paid as much as he demands here, but the movie’s makers want to stress that he was an unsung hero of the dig and that he was later elbowed aside and denied credit by stuffed-shirt types from the British Museum (who may have been as snobbish as the movie implies, but were right to be interested — and even possessive — of such a consequential find).
It is true that the world still might not know what was buried at Sutton Hoo were it not for Edith Pretty and her clever if somewhat unconventionally cultivated employee, though there’s something exceptionally British about all the interpersonal nuances that play out over the few days depicted in “The Dig.” For example, when Peggy arrives as the academically published wife of archaeologist husband Stuart Piggott (Ben Chaplin, who is inexplicably 20 years James’ senior when the two were in reality peers in age and profession), the film imagines a series of microaggressions suffered at the hands of both the sexist British Museum overseer (Ken Stott) and her husband (implied to be a homosexual). But instead of getting angry, Peggy only winces … and throws passionate looks at Edith’s rakish cousin Rory (Johnny Flynn).
Compared with American movies, the film feels so restrained as to seem repressed. In the platonic dance between Mulligan’s and Fiennes’ characters, that’s quite a satisfying line to walk (Basil has a supportive wife, embodied by Monica Dolan, but the connection with Edith works best in the unspoken spaces). But for Peggy and Rory’s carpe-diem romance, that a low fire on which to simmer.
“The Dig” is not intended for children, yet it’s so subtle in its conflicts that culturally curious kiddos may prefer it over grown adults, although this is also a good Netflix option for audiences troubled by the more confrontational themes of modern cinema. It’s hard to say whether the period this picture exhumes was any more innocent than what the world now faces, but that’s certainly the way Stone plays it, acting like an urbane orchidologist, cross-breeding contemporary art-house touches with the old-school refinement of a vintage Masterpiece Theatre production. Sometimes the best escape from the craziness of today is to lose oneself in history.

European consumers may be reac

But hurry the offer ends on F