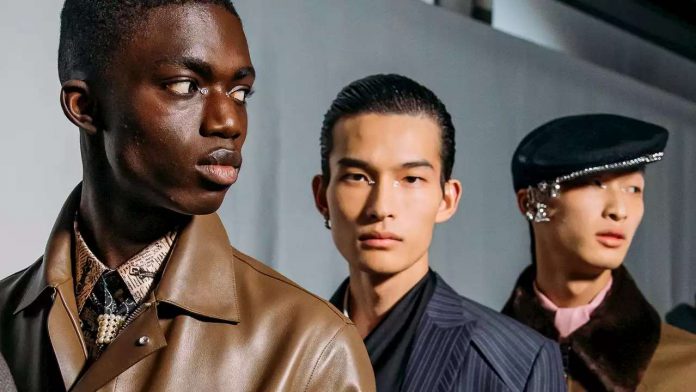 Brunello Cucinelli
—the designer responsible for Silicon Valley’s cashmere trouser boom—headed up the festival with a stream direct from his Solomeo, Italy estate. Other brands like Kiton and Herno have also presented new collections via livestream, while the trade show component of the event is expected to return in a physical way from February 21 to 23.
Milan Fashion Week Men’s:
Etro will be the lone live show at Milan Fashion Week Men’s on January 17th. Otherwise, we’ll be tuning in for livestreams and lookbook reveals, including Ermenegildo Zegna on January 15, Fendi on the 16th, Raf Simons and Miuccia Prada’s menswear debut on the 17th, Missoni on the 18th, and A-Cold-Wall on the 19th.
Backstage at Rick Owens’s fall 2020 show in Paris
Photographed by Acielle / Style Du Monde
Paris Fashion Week Men’s:
Paris’s menswear schedule, available through the Fédération de la Haute Couture et de la Mode, does indicate there will be several live shows, including Rick Owens and Louis Vuitton on January 21, Dior Men on January 22, and Hermès on January 23, though it’s not known if these will be in-person shows or live-streams of audience-free events. Either way, the Parisian schedule is full with new collections from Berluti, Rhude, JW Anderson Yohji Yamamoto, Dries Van Noten, Botter, Isabel Marant, Vetements, Wales Bonner, Loewe, Jil Sander, Thom Browne, Y/Project, Lemaire, Alyx, Celine, Junya Watanabe, Comme Des Garçons Homme Plus, Heron Preston, and many more.
Advertisement
Backstage at Y/Project’s fall 2020 show in Paris
Photographed by Acielle / Style Du Monde
Paris Couture Fashion Week:
When couture brides from Chanel, Christian Dior, Valentino, and Maison Margiela walk the runway, they’ll be doing it virtually. All of Paris’s official couture shows will be live-streamed, some pre-recorded and others held live without an audience, like Giorgio Armani is planning to do from his Milan headquarters. Newcomers to the couture schedule, like Charles de Vilmorin, Alber Elbaz’s AZ Factory, S.R. Studio L.A. C.A., and Area will have to figure out exciting ways to convey the magic and craft of couture digitally, while long standing members like Giambattista Valli, Alaïa, Iris Van Herpen, and Schiaparelli have at least one-season of digital experience to rely on.

In addition, the industry will surely be talking about Kim Jones’s debut at Fendi, where he is taking on womenswear and couture for the first time. That’s set for January 27.
New York Fashion Week:
Officially scheduled from February 14 to 18, New York Fashion Week is expected to be mostly virtual. The Council of Fashion Designers of America has not made any official statements yet, nor have any American designers, so there’s a chance for some guerrilla shows like Eckhaus Latta’s sidewalk spring 2021 event to pop up closer to these dates.
Backstage at Richard Quinn’s fall 2020 show in London
Photographed by Corey Tenold
London Fashion Week:
From February 19 to 23, London Fashion Week will take place without any audiences. “Despite all the challenges the last few years have brought, I truly believe that the creativity, agility, and business savvy of our sector will prevail and the societal conscious of our British businesses and fashion workforce will see us re-calibrate to not only be strong creatively, but strong sustainably too,” wrote Caroline Rush, the CEO of the British Fashion Council, in a statement about the digital-only shows.
Milan and Paris’s Womenswear Fashion Weeks:
The fate of the Milan and Paris’s womenswear collections, planned for the end of February and the beginning of March, seems to hinge on the success of both cities’ menswear shows this month and the changing COVID precautions in each location. Expect updates following the couture shows about what’s physical, what’s digital, and what’s coming off the calendar until a later date.
Vogue Runway
A daily recap of the biggest runway news, latest trends, and emerging designers.
Sign Up Now

Here’s Absolutely Everything We Know About Jules’ Backstory on ‘Euphoria’

How Old Is Biden? Well He’ll Have a Lot of Good...