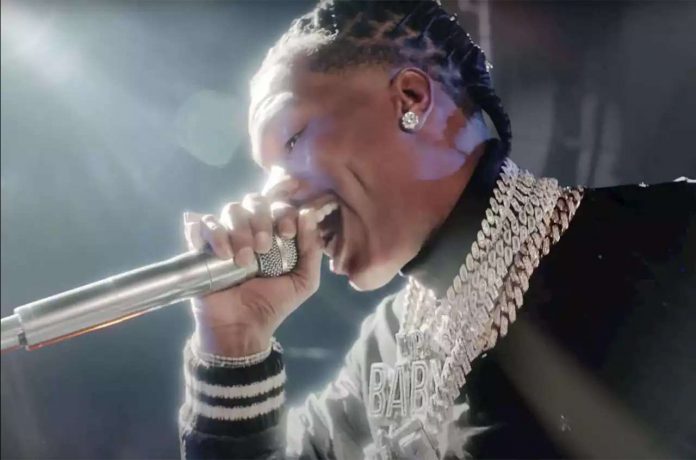 Super Bowl LV is just days away, with the Kansas City Chiefs set to take on the Tampa Bay Buccaneers.

, who gets totally into their whole vibe.
“We’d never shamelessly rely on a celebrity cameo,” says Wayne, as Garth adds,”Right, Cardi B?”
Lil Nas X (Logitech)
The rapper gives a shout-out to all the creators, artists and rule breakers who”Defy Logic” in the inspiring ad, and previews his
,”Montero (Call Me by Your Name),” which derives its title from Nas’ birth name.
Dolly Parton (Squarespace)
The legend rewrote the lyrics to her classic 1980 working woman anthem,”9 to 5″ in her first-ever Super Bowl ad, honoring people who are using their time at home to work on passion projects.
“Working 5 to 9/ You’ve got passion and a vision/ Cuz it’s hustlin’ time/ A whole new way to make a livin’/ Gonna change your life/ Do something that gives it meaning,” she sings.
Lenny Kravitz (Anheuser-Busch’s Stella Artois)
In the ad, Kravitz mimics his heartbeat while playing”It Ain’t Over ’til It’s Over” on the drums and guitar. The song then sends Kravitz into a colorful animation, where he toasts to creating more memories with his bandmates.
The Weeknd (Pepsi)
The clip shows people from all walks of life jamming along to The Weeknd’s”Blinding Lights,” including a security guard outside Tampa’s Raymond James Stadium, who almost overlooks the halftime show performer.

The superstar cruises up to the gate in a convertible and smiles at the guard before he’s let in through the gate.
Nick Jonas (Dexcom)
The Super Bowl commercial for Dexcom, a glucose monitoring system that helps people with diabetes — like Nick Jonas — keep tabs on their glucose levels without having to prick their fingers.
“Drones deliver packages, and people with diabetes are still pricking their fingers? What?” Jonas asks in the ad, as a video-editing trick turns the 28-year-old into an old man.
Lil Baby (Rockstar Energy)
The ad spotlights the Grammy-nominated rapper plus fashion designers, tattoo artists, barbers and more, who perfect their craft and gain recognition for it.
“I wasn’t born in the spotlight. Nah, I had to grind to shine, like a star on a hot night. And something about the struggle now resides in my muscles. And every trial and trouble helped define my hustle,” Baby narrates while his song”Errbody” plays in the background.”Real rock stars don’t chase the spotlight. It chases them.”
Shaggy (Cheetos)
Shaggy advises Mila Kunis to recite the titular line of his hit”It Wasn’t Me” after she gets caught orange-handed by her husband Ashton Kutcher.
Daveed Diggs (DoorDash)

Your Sex Horoscope for the Weekend

Inside the Business of Vicuna the Wool Worth More Than Gold