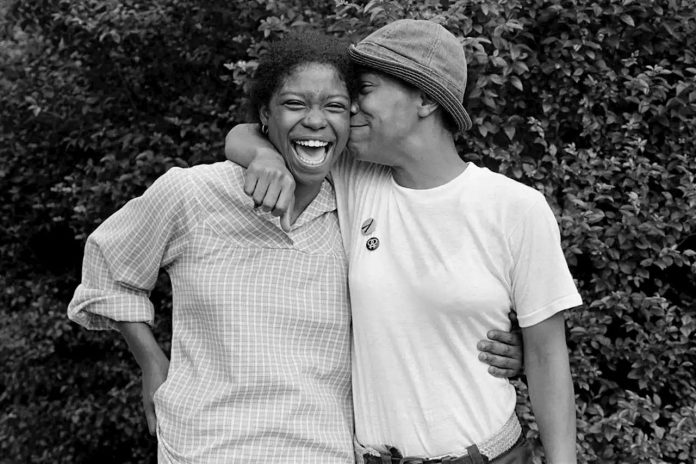 The American photographer’s intimate images – featuring lesbians of all ages, races and backgrounds – are a vital document of LGBTQ+ history

Dominique Sisley: You started working on
Eye to Eye
over 40 years ago. What can you remember about the beginning, when you first felt inspired to make it?
JEB: I made the book because we needed this book. I couldn’t find anything like it because of the long history of LGBTQ oppression and the exclusion of lesbians from media representation. Our lives have just been erased, so consistently. So I made my very first lesbian image in 1971, and it was of me kissing my lover. It was a selfie because I didn’t even know anyone who would photograph us, and I desperately wanted to see a picture of women kissing. Everyone needs that kind of validation, you know? You want to see yourself reflected. And then, eight years later, I’d made enough photographs for a book. Of course, at the time, none of the lesbian or gay publishers wanted to publish it because I wanted the photos printed on good paper, and they thought it would cost too much. So I had to self-publish it, and I did what we would now call a Kickstarter campaign: I raised the money from the people in my own community.
“I desperately wanted to see a picture of women kissing. Everyone needs that kind of validation, you know? You want to see yourself reflected” – JEB
DS: What was the reception like when it was published?
JEB: Oh, it was amazing. It was really amazing. I think the reason that there was such an incredible response is because there was such a hunger in the lesbian community for more of these kinds of images. The thing that’s most difficult for young people to understand is how completely
impossible
it was in the 1970s to find authentic and affirming images of lesbians. There were images of young, slim, blonde, “pretend” lesbians, there were the monster, man-eating lesbian stereotypes, and there was some pornography. My work was made as a counter to those representations, and it was wonderful to see the response that it got.
JEB. Dyke,
© JEB (Joan E. Biren) from ‘Eye to Eye, Portraits of Lesbians’, published by
Anthology Editions
DS: What was your personal journey with your sexuality like at that time? What was it like growing up gay in Silver Springs?
JEB: At a very young age I think that I was attracted to women; when I look back in my family albums, I always have my arm draped around my girlfriends. I had big crushes in junior high school, but I didn’t act on them until I was undergraduate college. And then I did my graduate work at Oxford University, where I tried to be straight, and that was a horrible failed experiment. When I came back to the US, it was 1970 and the beginning of the feminist movement, and I would call that my rebirth as a lesbian. Unfortunately, I was eventually thrown out of my women’s consciousness-raising group because they thought lesbianism would be a distraction to the women’s movement, but I knew I couldn’t go back in the closet. It was very isolating, in the beginning, to be a lesbian and political because a lot of the lesbian culture was apolitical. It was based in bars.
“I’m endlessly grateful to all of these women for making this book possible; I’m forever grateful for their willingness to show that … the power of being out had huge rewards that made it all worth it” – JEB
DS: You went on to travel all over the US for this book.

What are some of the stories or the people that really stayed with you over the years?
JEB: At that time my friends weren’t that diverse, so I set out because I knew I wanted it to have all kinds of lesbians in this book. I had to find most of these women by word of mouth, mostly because there was no internet back then. Also, a lot of people don’t understand that there was an
enormous
fear about being photographed and identified as a lesbian at that time. You could lose custody of your children, you could be fired from your job, you could be banished from your family or your place of worship. You could be deported if you were here on a visa, or thrown out of your rental apartment. So I’m endlessly grateful to all of these women for making this book possible; I’m forever grateful for their willingness to show that, even though there were all these harmful consequences, the power of being out had huge rewards that made it all worth it. They had the ability to live an open life – free from the heavy burden of hiding, lying and self-denial – because they knew that what we hide also harms us from within. So these inspiring women are what I remember.
Priscilla and Regina. Brooklyn, New
York. 1979
© JEB (Joan E. Biren) from ‘Eye to Eye, Portraits of Lesbians’, published by
Anthology Editions
DS: How do you feel about the current political climate – it’s obviously a very different time for the LGBTQ+ community, but do you still feel politically engaged? Would you still call yourself an activist?
JEB: I feel very passionate about the LGBTQ+ movement now, because we need it more than ever. We need radical movements. The fight for social justice has been renewed all over the world, and we have to understand that it has to include all people: people of colour, trans and non-binary people, poor people, all kinds of people. And we also have to address issues like housing equity, immigration reform, and healthcare. I’ve felt for a long time that many of the demands of the LGBTQ+ movement have been moving in the wrong direction; we’ve been focused on corporate anti-discrimination, marriage equality, hate crime legislation, and military inclusion. But when we started, we wanted to stop all wars, we wanted a military ban, and we wanted to scrap the nuclear family and monogamy. We wanted to provide the same privileges and benefits to all people, no matter how they structured their relationships and families. And because we were illegal ourselves, we didn‘t want a carceral state that locked up more people – we were joined up with the abolitionists. But thankfully today, we have these wonderful, newly invigorated radical movements that understand that we need change at a very fundamental level, if we’re all going to survive. LGBTQ+ people are all kinds of people, and that is only one little reason why we need social and economic justice for everyone. So I’m a little passionate about it. I really think we’re going in the right direction, though.
Eye to Eye: Portraits of Lesbians
by JEB is published by

See Pregnant Katy Perry’s Baby Give Her the Finger in Ultrasound...

U K Coalition for Change This is The Moment For an...