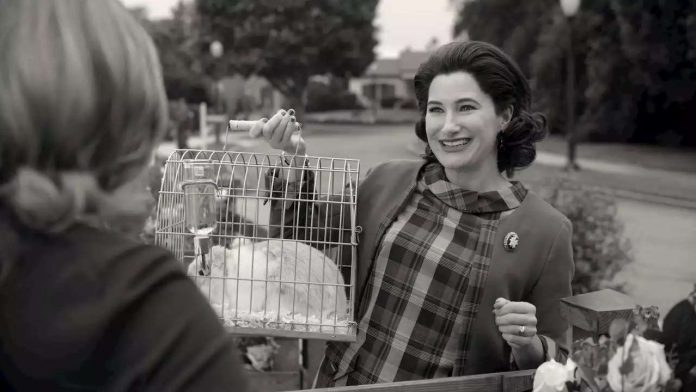 ‘There was so many things about it that I was so thrilled by, confused by, excited about,’ she tells ET.

‘s robo-human Vision, supporting played that Hahn says she always found herself gravitating towards in the
Avengers
movies.
WandaVision
itself is told through a prism of classic American sitcoms through the decades, thus not only offering the chance to join an uber-franchise but promising creative risk, as well. That, it turns out, is the center of the Venn diagram where she and Marvel meet.
“There was so many things about it that I was so thrilled by, confused by, excited about,” Hahn says.”It was just irresistible.” (As for what her kids think of her joining the MCU?”I’m Mom, so nothing I can do is going to be cool. I think they were like, ‘What..?”)
Marvel Studios
In
WandaVision
, the titular couple relocate to the suburbs, with Hahn playing the requisite nosy neighbor, Agnes. She leaned on her children’s deep wealth of knowledge about the MCU as she developed Agnes, while also turning to the comic books for her own research on Scarlet Witch.”And boy, is that backstory intense. Wow. It’s deep.
Real deep
. Being able to dig into the source material a little bit was really fun and also just, like, ‘
Oof
, Wanda’s really been through it.

”
What darkness lurks beneath the series’ shiny surface is to be seen — many fans theorize Agnes is actually an alias for the comic character Agatha Harkness, a witchy and occasionally malevolent mentor to Wanda — but Agnes’ introduction in the pilot episode is all shenanigans and flying shellfish. The episode is a black-and-white throwback to
The Dick Van Dyke Show
and
I Love Lucy
that was filmed in front of a live studio audience.
“Looking out and seeing a sea of audience members dressed in 1950s clothing and seeing the camera and the lights from the ’50s, the buildup to it as this little teeny group of actors with this amazing director, I will just hold that to my heart,” Hahn says.”We rehearsed it like a play. We were all racing around backstage for quick changes and to grab props and waiting for cues. We really put on a show together. The team was incredible. The ambition was incredible. And the wigs!”
Subsequent episodes see the gang through the ’60s and ’70s — via riffs on
Bewitched

These ‘Stranger Things’ 3 Memes Made Me Fall Off My Chair

A Primer on Grimes the Experimental Pop Star Who Just Had...