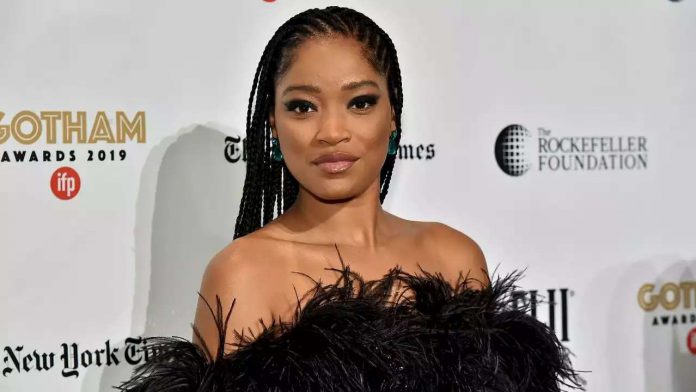 The actress and the musician shared a coffee and some hand-holding in Hollywood on Sunday.

By
7:29 PM PST, February 22, 2021
Theo Wargo/Getty Images for IFP
Keke Palmer
is getting close with her rumored beau. The actress was spotted on Sunday spending quality time with her rumored boyfriend, musician Styn.
Palmer, 27, and Styn, were all smiles as they grabbed some coffee together at Blue Bottle in Hollywood.
The actress looked stylish in a crimson blazer, which she wore over a white top and denim shorts. Styn, meanwhile, went for a more punk look in ripped jeans and a vintage Motörhead t-shirt.
The pair rocked face masks as they went in and out of the shop,
, and only took them off while enjoying their drinks and chatting closely outside.
DIGGZY/SplashNews.com
The pair were spotted getting cozy together while chatting and laughing.

An eyewitness says Palmer accidentally spilled her own coffee, but Styn managed to save most of it before it was all wasted.
The pair wrapped up their adorable, flirty outing with Styn helping Palmer put her face mask back on, and walking off hand-in-hand.
The pair have been romantically linked as far back as 2019, and have shared Instagram videos of one another — although they have not confirmed that they are a couple.
In December, Palmer told
Page Six
that she was seeing someone special, but wouldn’t elaborate on who.
“You know, it’s not a love life if I share with you because it’s public,” she told the outlet. “So at the end of the day, just know your girl Keke is not lonely — ever!”
GET THE ET NEWSLETTER