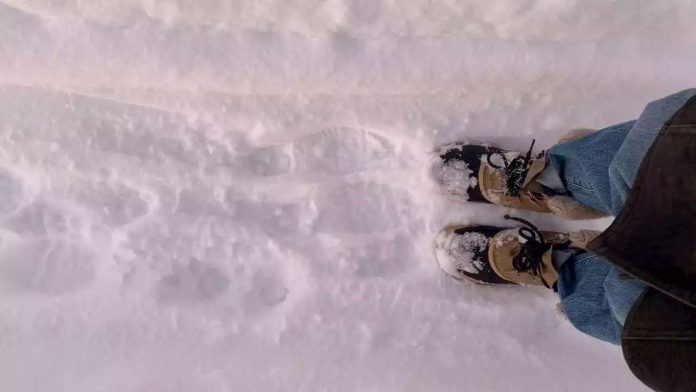 A pair of 30-year-old Sorel snow boots have been given new life.

fleece pullovers
as I’ve been spending time in a colder, windier, and snowier Connecticut. (It’s even snowing as I write this.) The days of quick jaunts from my apartment to the subway, dodging a puddle here, an ice patch there in inappropriate footwear are behind me (at least for now).
During the first big storm, I dug up a pair of my mom’s worn-in Sorel Caribou
snow boots
from the back of our coat closet—my leather Chelsea’s wouldn’t stand a chance in 6–10 inches. She’s had the pair for my entire life; they’re actually older than I am. The original Caribou style is instantly recognizable with its black and cream rubber soles, neutral suede lace-up shaft, and faux-fur trim.

When I was younger, I never thought anything of them. They were the clunky footwear my mother wore while shoveling the driveway or taking the dogs out in the snow—real-deal snow boots. But with a somewhat newer appreciation for practical fashion items and back-to-back snowstorms in the forecast, I looked at her pair of 30-plus-year-old boots with a fresh perspective.
Courtesy of Madeline Fass
Advertisement
Perhaps it was the fact that the boots had been on my radar the past few winters—I’ve seen the same pair on e-commerce shoe shops at the likes of

How Police Brutality Can Function as Terrorism

How Many People Has Donald Trump Already Infected With COVID-19?