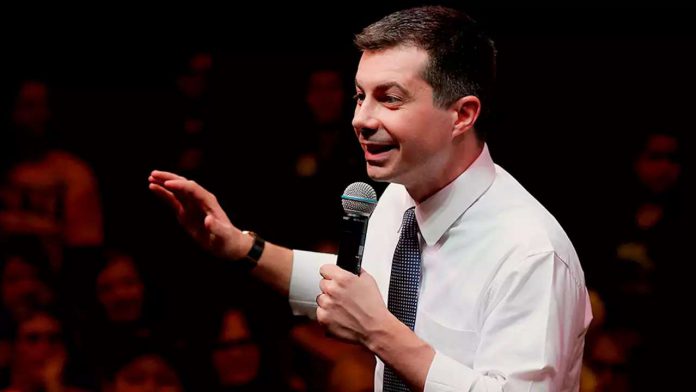 If there were any doubt that Hollywood is still enamored with former presidential candidate and current U.S. Secretary of Transportation, Pete Buttigieg, look no further than the heavyweight filmma…

Matt Donnelly
AP Photo/Sue Ogrocki
If there were any doubt that Hollywood is still enamored with former presidential candidate and current U.S. Secretary of Transportation,
, look no further than the heavyweight filmmakers and top distributor who will mount the story of his historic presidential campaign.
“Mayor Pete,” directed by
Jesse Moss
, the co-director of last year’s “Boys State” and director of the 2014’s “The Overnighters,” will take the audience inside Buttigieg’s quest to be the first openly gay president in United States history. “Mayor Pete” will show Buttigieg at home in Indiana with his husband, Chasten, and go inside the campaign’s early days as well as Buttigieg’s historic, contested victory in the Iowa caucuses.
Moss and Amanda McBaine, the other co-director of “Boys State,” serve as producers of “Mayor Pete.

“Boys State” won the 2020 grand jury prize at the Sundance Film Festival, and sold at the festival to Apple and A24 for a then record-high $12 million. (That record was
by Questlove’s “Summer of Soul”).
“Mayor Pete” will be released later this year.
In summer 2019,
Axios reported
that film cameras were following Buttigieg, the former mayor of South Bend, Indiana, for Story Syndicate, a nonfiction production company founded by veteran filmmakers (and married couple) Dan Cogan and Liz Garbus. Cogan won the Academy Award for best documentary feature in 2017 for “Icarus.” Garbus co-directed with Lisa Cortés the Stacey Abrams documentary, “All In: The Fight for Democracy,” another collaboration between