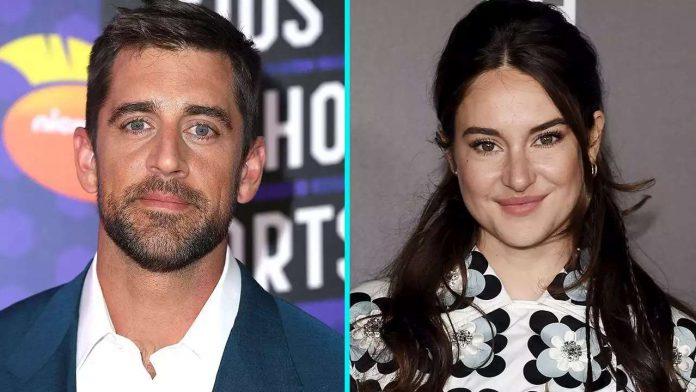 The ‘Big Little Lies’ actress confirmed the exciting news in an interview with Jimmy Fallon.

Monday night, revealing that the pair met during the pandemic.
“For us, it’s not new news, you know?” she told Fallon.”So it’s kind of funny. Everybody right now is freaking out over it and we’re like, ‘Yeah, we’ve been engaged for a while.'”
The Big Little Lies
actress who admitted she’s never been to a football game, said she never pictured herself marrying an athlete.
“He’s, first off, just a wonderful, incredible human being. But I never thought I’d be engaged with somebody who threw balls for a living,” Woodley told
The Tonight Show
host. “Like, I never thought as a little girl, I was like, ‘Yeah, when I grow up, I’m gonna marry someone who throws balls! Yeah!’ But he’s really just so good at it.”
The 29-year-old actress says she doesn’t know the Green Bay Packers quarterback as a”football guy.”
“I don’t get it. He’s good. He’s great. But, like, I don’t understand. ‘Cause I don’t know him as a football guy. I know him as, like, the nerd who wants to host
Jeopardy!
.

That’s the dude I know.”
Rodgers
dropped the bombshell
that he’s engaged to Woodley during the NFL Honors broadcast on CBS Feb. 8.
“2020 was definitely a crazy year filled with lots of change and growth, some amazing memorable moments,” he said.”One hundred eighty straight days of having my nose hair scraped, playing for very little fans or no stands the entire season. I got engaged.”
The 37-year-old NFL star didn’t name Woodley in his acceptance speech for the most valuable player award, though news broke that he was dating the
Divergent
actress less than a week before he revealed his engagement.
People
was first to break the news that Rodgers is indeed engaged to Woodley, quoting a source that said it wasn’t surprising that he proposed and that the two are”very happy together.”
According to
, the two clicked from the start and can’t wait to get married after spending last fall living together.
RELATED CONTENT

President Trump Says He Will Ban TikTok From U S

Yes Julianne Hough Reads Your Comments On Her Strange Workouts