Home Woman Black Country Artists From the ’90s Share Their Stories ‘It Was a... 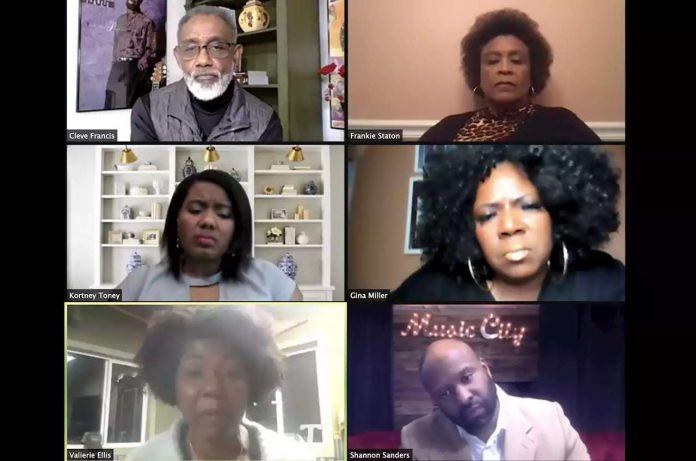 Cleve Francis and other Black country artists from the ’90s shared their experiences on making music in Nashville.

— Entertainment One GM
Gina Miller
said, “I do feel like there is some kind of movement emerging in front of us. We’re at the point where you can name a lot of names — more than both hands will allow.”
As to where to go from here, Francis suggested that the Country Music Association form a diversity task force, but posited that nothing would change. “If Nashville is serious about [structural and institutional] racism, which I have strong doubts, the CMA would form a task force to discuss this problem.” The industry needs to ask itself: “’What can we do to be more inviting to the African-American community? We’ve taken their drumming and their banjos and not given anything back’ … This is Racism 101, and if they want to keep it that way, they’re making a statement.” While he noted that many of today’s leaders are younger, “They’re saying they don’t really need us. ‘We’re doing fine, the door is closed.’”
(Both the CMA and the Academy of Country Music did form diversity task forces in 2019, primarily to address the issue of lack of play for female artists. Representatives for the CMA did not immediately respond for comment.)
The idea was also suggested to market to the broad swath of fans who may not know about the music but would like to support it and expand beyond the traditional country audience.

If people don’t like you, they aren’t going to like your music,” said panelist
Shannon Sanders
, BMI executive director, creative.”The investment has to be made in new audiences. People who buy Black music will buy [country music by Black artists] too. I’m not saying just black people. [It’s] not trying to force it to people who say they don’t want it.”
Francis also suggested reviving the BCMA under Staton, who stressed that for now, the organization is dormant. By the panel’s end, it was clear its status may change.
Staton predicted that as more Blacks are given their fair chance in country music, there will be an evolution. “It’s going into those places that it hasn’t gone,” she says. “There’s a whole lot of room for a lot of great things to be done. We’re standing on the forefront of a yet-defined [era] that will go down in history.”
And if the conventional gatekeepers continue to deny creatives entrance, Sanders offered another solution.”If you keep banging on the door and they don’t want to let you in, just go build your own house.”
Darius Rucker, Jason Aldean, Luke Bryan and Charles Kelley Perform ‘Straight to Hell’ at the 2018 CMT Music Awards
By