Home Woman This Is the Best Vegan Cookbook For Everyone 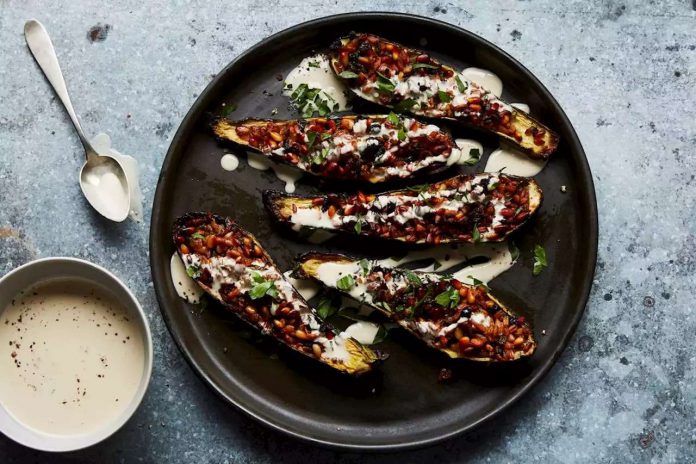 Whether you observe Meatless Monday or are considering going vegan, you’ll want to check it out.

Jenné Claiborne believes in the power of vegan food
and
in the power of Southern flavors and soul food. She acknowledges the false notion that these cuisines are always fried and full of unhealthy fats by driving the point that the South is an incredibly diverse region of the United States, with influences from enslaved people, indigenous Americans, and Europeans—all leaving a distinct mark on this culinary landscape. Her mission boils down to food that not only feeds your body but that “makes you tap your foot and feel alive.” This is a mission we can get behind.
Sweet Potato Soul
gives you everything you need to get started with Southern vegan cooking—something both of us have had little to no experience with until this competition. This book ensured we never felt lost (and as lovers of sweet potatoes, we particularly appreciated the section on different varieties of the potato and how to cook with them).
Jared made the Black-Eyed Peas Hummus, which was as easy as breaking out the food processor. It offered the creaminess of chickpea hummus with a flavor that was different enough to feel like something brand-new. The Southern Patatas Bravas were similar, using a spiced sauce that made roasted potatoes into something special!
Rohita made the Cardamom Apple Pie, which produced a wonderfully flaky crust using vegan butter and sweet apples that had a little extra something from the spice. Plop some nondairy ice cream on top and experience bliss! She also made Claiborne’s Skillet Cornbread, which had just the right amount of sweetness and was the perfect pairing to winter soups and stews.
Clairborne’s passion for vegan cooking and the Southern palate are evident from the first page of the book. Vegans and non-vegans alike will be inspired to step into the kitchen not only to make food that’s better for the planet, but food that’s comforting, flavorful, and just plain delicious.
by Laura Wright
Photo by amazon
In the introduction to her cookbook, Laura Wright describes food as “a driving force of pride, success, and pleasure.” She writes fondly about how her childhood exposure to farm-fresh produce and home-cooked meals helped her develop her approach to cooking, and of her desire to give others the ability to make meals as satisfying and wholesome. And with her book, she does just that.
The First Mess Cookbook
is an excellent all-purpose vegan book with a wide collection of recipes, spanning various flavors and cuisines, which should make a wide audience happy.

Just about anyone will be able to find a number of recipes that appeal to them.
We started out with the Tofu Noodle Soup With Coconut Lemongrass Broth, which was light, refreshing, and satisfying all at once. Doing something as simple as blending cilantro and coconut milk with a few other ingredients makes a broth that’s delicious and versatile. We loved the hearty additions of broccoli, tofu, and snow peas, though we suspect they could easily be replaced with any vegetables that happen to be in your fridge. (Rohita added mushrooms and soba noodles, and they fit in perfectly.) The only downside to this dish is that after sitting in broth overnight, the broccoli and tofu went from having a firm bite to complete mush. The leftovers were missing a much-needed crunch.
Rohita also made the Eggplant”Bacon,” which she found to have a pleasingly sweet, smoky, and salty flavor balance, but a chewiness that didn’t quite live up to the crispier bacon-like texture she was looking for. She also went for the Tandoori-Rubbed Portobellos With Cool Cilantro Sauce, which used a familiar spice blend in an unfamiliar and exciting way. The smoky, warm spice worked well with the flavor of the mushrooms, which developed an excellent char in a cast-iron pan—though grilling them, as Wright suggests, would make them even better.
Jared tried the Pepperoncini Lentil Crunch Salad and the Roasted Cauliflower With Green Tahini, and was delighted by both. The salad paired familiar ingredients (lentils, onion, red pepper) with a dressing that called for pepperoncini pickling liquid blended with cumin, white wine vinegar, and maple syrup. Jared had used tahini in his own cooking plenty of times before, but Wright’s suggestion of blending it with basil, green onion, and maple syrup made for a flavor that was entirely new to him, and very much welcomed. It was a perfect accompaniment to the tender roasted cauliflower and crispy chickpeas. Not only does he plan to make this recipe again, but he plans on trying the green tahini sauce in other dishes as well.
Wright’s passion for vegan cooking is apparent from the first page of
The First Mess
, and when home cooks try a few of her recipes, they will likely feel the same enthusiasm for produce-forward cooking. This is indeed food to take pride in.
And The Winner Is…

Cardi B Pleads Not Guilty to F