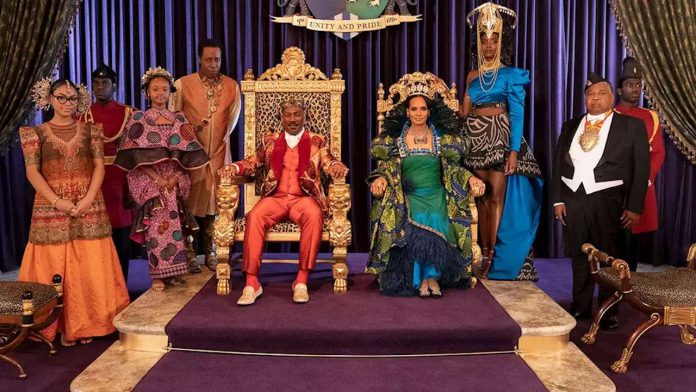 Over three decades ago, Eddie Murphy and Arsenio Hall starred in the iconic comedy
Coming to America
, delivering plenty of lines, scenes and styles remembered and quoted often today.
In the sequel
Coming 2 America
, Murphy’s Prince Akeem and Hall’s Semmi as well as many more beloved characters are enjoying life in the kingdom of Zamunda. But when Akeem learns his long-lost son Javelle Junson (Jermaine Fowler) might be the only option to make peace with the neighboring country, Nextdoria, a quick trip back to Queens is in order.
The sequel boasts plenty of new jokes and memorable performances, as well as some development from the 1988 film — Akeem has three daughters for instance and Lisa (Shari Headley) has upgraded from McDowell to Zamundan royalty. With such change comes a fresh new take on Prince Akeem’s homeland and its regal style.
The Hollywood Reporter
spoke with Carla Farmer and Stacey Morris, hair department heads for the sequel, about their inspiration for styling fan favorites and new characters alike in present-day Zamunda.
For Farmer, who boasts being a huge fan of the cult classic herself, her goal was to showcase”the new generation” of Zamunda while also ensuring people would be captivated by each character’s”hair story.” Amid her research that took over a year, Farmer quickly became a fan of and drew inspiration from the Afro-centric and Afro-punk movements.
The three princesses of Zamunda — Meeka (KiKi Layne), Omma (Bella Murphy), and Tinashe (Akiley Love) — each don a variety of styles including ombre faux locs, puffs, bantu knots, and plenty of embellished braids to highlight their royal status and the wealth of Zamunda overall. As for Nextdoria’s princess Bopoto (Teyana Taylor), she works braids with purple and yellow ribbons as well as one showstopping afro, emphasizing an edgier look influenced by urban culture.
“We played with the idea that this new generation is more connected to their roots and to the culture as opposed to the generation ahead of them, which was more influenced by European culture,” Farmer says.”Similar to here in America, where the younger generation is gravitating more to natural hairstyles.” The film’s hair department co-head notes that while braids appear throughout the film, a goal of hers was to show the versatility of”beautiful Black people,” adding”I didn’t want to give the audience what they expect, especially being in Zamunda.

When updating the looks of Prince Akeem and his friend/personal aide Semmi as well as Akeem’s wife Lisa, Farmer and Morris considered their royal status as well as what aspects of their style would remain decades after.
Prince Akeem’s mini afro, seen when he trekked about Queens looking for his bride-to-be, was updated to a low cut with a crisp lineup. Semmi’s flat top kept its height but Morris opted to round out the cut and bring texture to his hair for a modern style. As for Queen Lisa, Farmer admits she wanted to present her character differently than what we see on screen because”she’d been in Zamunda for awhile and influenced by it.” However, director Craig Brewer suggested the audience would want to see a classic Lisa. Thus Farmer kept her signature softer, brushed out curls that were adorned and cascaded about magnificent crowns.
Morris shares one of her favorite characters was Nextdoria’s General Izzi, played by Wesley Snipes. For all of Nextdoria’s characters, from the general to his daughter Bopoto and son Idi, Morris says their look was edgier and influenced by urban culture. With General Izzi specifically, Morris says she created a design inspired by the Amasunzu style seen on men and unmarried women in Rwanda. Plus when she saw Snipes’ wardrobe designed by Ruth E. Carter, she says”I knew I was on the right path.”
For all of these looks to come together as vibrantly as they did, Farmer and Morris attribute the abundance of resources offered by Atlanta, since filming took place on the Tyler Perry Studio sound stages.
“I think we would agree our number one asset to the hair team was the beauty supplies that they have in Atlanta. We were like kids in a candy store,” Morris says.
When asked what each of them enjoyed most from their
Coming 2 America
journey, Farmer shared pride in creating”a love story for the culture” and appreciation in seeing people copying looks from the film already on social media.
“I wanted to do this for the culture. I think with all of our films that Stacey and I have worked on
Dolemite is My Name