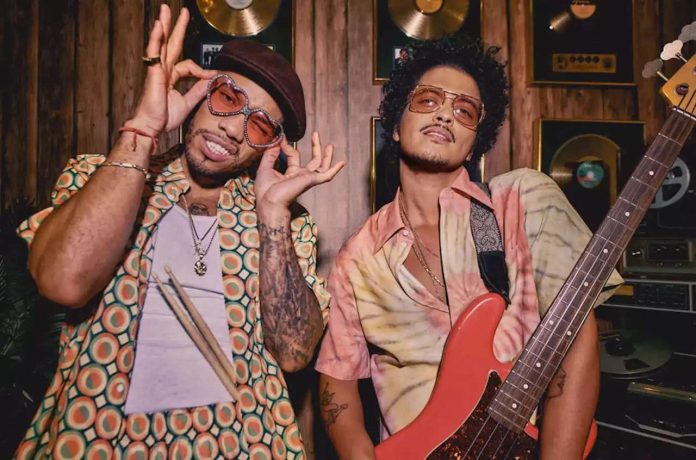 The duo’s new project lands its first No. 1 on the chart with ‘Leave The Door Open,’ which has already has secured a monster start in radio airplay.

all-genre ranking
.
As the song’s early debut foretold, radio has latched on to “Door” with haste. In just its second week on the chart (and first full week of radio play), the single rises 16-10 on the
chart and secures the fastest flight into the top 10 since Maxwell also required two frames to reach the tier with “Lake by the Ocean” in 2016.
Similarly, “Door” bursts 35-16 on the
R&B/Hip-Hop Airplay
chart after a complete radio tracking week. The move solidifies the artists’ appeal at the format, particularly in the case of Mars, who has sent six of his last seven singles into the chart’s top 10, dating to his featured turn on Mark Ronson’s “Uptown Funk!” in 2015.
Silk Sonic Croon ‘Leave the Door Open’ at 2021 Grammy Awards: Watch
The explosion, too, puts the artists’ in rare company. Since 2014, the only songs to reach as high as No. 16 in their second week on the 50-position chart have included one or more of Beyonce, Drake or Rihanna.

Of course, those acts’ megastar status makes their new music releases almost an event in itself, and one that radio programmers naturally have endorsed.
The last song before “Door” to climb to No. 16 or better in its second frame
without
one of the three aforementioned stars was Kendrick Lamar’s “i,” which jumped 19-15 in its sophomore week in 2014.
The “Door” debut comes on the heels of Silk Sonic’s maiden live performance at the 63rd annual Grammy Awards on March 14. The duo and their supporting band and background singers performed twice during the telecast, initially with “Door” and later for a tribute to Little Richard, who died in May 2020. Anderson .Paak also scored another highlight during the ceremony, with a win for best melodic rap performance for “Lockdown,” his fourth career Grammy.
By