Home Woman My friend is an anti-vaxxer and she’s converting my husband What can... 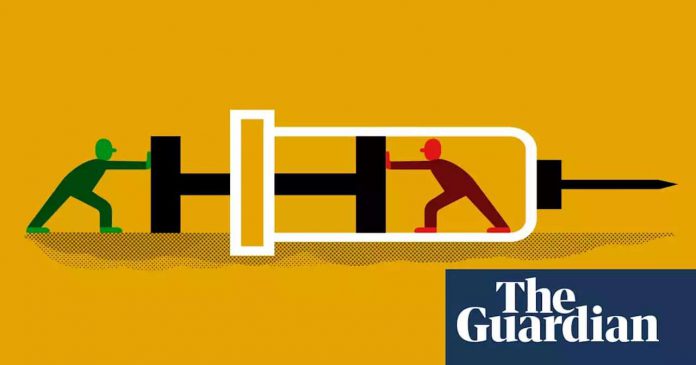 ‘We can believe a difference of opinion will lead to confrontation when it might be just a conversation.’
Illustration: Lo Cole/The Guardian
‘We can believe a difference of opinion will lead to confrontation when it might be just a conversation.’
Illustration: Lo Cole/The Guardian
Fri 26 Mar 2021 15.00 GMT
Last modified on Fri 26 Mar 2021 19.45 GMT
I recently had my Covid-19 vaccine. One long
standing friend queried my decision and forwarded anti-vax conspiracy theories. Initially I responded by saying that we should respect each other’s choices and
I would rather not argue with her about it. But after thinking it over, I felt
angry and upset about her stance.
As my husband has recently recovered from Covid-19, I am assuming he will have some natural immunity to the disease, but he is
undecided about getting the vaccine and hasn’t yet responded to invitations to do so. I think he is quite influenced by my friend’s husband and the couple’s negative attitudes towards science in general, which are linked to their religious beliefs (which I do not share).
A lot of the anger
I feel towards my friend is related to the frustration
I feel towards my husband, and the recognition that our belief systems are very different; he and I are from different cultures.
My friend has attempted to talk to me but I don’t feel able to do this at the moment. I am aware that
a more constructive stance on my part might be better. However,
I
feel weary of trying to convince people to think rationally when they choose not to, and I am tempted to
give up on the friendship. But that calls into question my marriage and my whole life, which has been spent trying to understand and live with a person of another culture and
world
view
.
It can be frustrating when people don’t feel the same way, especially when it’s over something that is so universally important. You show quite a bit of critical thinking, yet you also realise you are giving headspace to something you have no control over. Let’s try to look at why.
I consulted
psychotherapist John-Paul Davies
. He explained that when we get into relationships with people, be they platonic or romantic, we tend to look for the similarities we share; so we find that person attractive, but we also find appealing “the complementing differences we have”.
To you, the vaccine spells safety; to your husband and friends, it signals a threat. Yet “you have more in common than you think,” Davies said, “in that you’re both acting out of fear.

Your fear is of the virus; theirs is of the vaccine. Fear, Davies said, “distorts our perception of that other person, and we start to look at people as a problem rather than a person.” You also stop seeing those similarities you once saw, the things that brought you together; all you can see are the differences, which have become a threat.
I wasn’t sure why giving up on the friendship calls into question your marriage and whole life. Have you had to make many concessions? Why does this vaccination issue threaten so much else?
I understand your anger is over your friend’s stance, but also wondered if it was anger at yourself for not responding to her theories. If so, you may want to look at what this taps into: do you often think you can’t say how you feel? We can believe a difference of opinion will lead to confrontation when it might be just a conversation. You also mention “feeling weary of trying to convince people” and “trying to understand and live with… another culture and worldview”. Have you had to make a lot of compromises? Perhaps you feel it’s all been one-way?
Read more
But I also wonder if maybe, for all your talk of frustration, there might be fear around your husband potentially dying, and that’s something so scary for you that you can’t go there.
Davies suggested you try to talk to your husband a bit more. “A few times you say, ‘I think’ [about what your husband may feel/do]. It might be worth finding out where he actually stands.”
Maybe your friends and husband have given this a lot of thought, just as you have, and come to a different conclusion. And maybe, as Davies said, “it’s a decision they might truly believe is helpful to them”. The religious aspect is very hard to take on, because it’s based in faith and highly personal.
When I have differences with someone, I find it tempting to try to convince them; but I’ve had more success in getting them to explain their decisions. A more conciliatory approach might be to say: “Tell me what you know.” It’s probably unlikely they will convince you of their argument, or you theirs, but in the incidental conversation you may remember why they are your friend or your husband.
Every week Annalisa Barbieri addresses a family-related problem sent in by a reader. If you would like advice from Annalisa on a family matter, please send your problem to

Truth About Antonio Banderas And Melanie Griffith Getting Back Together