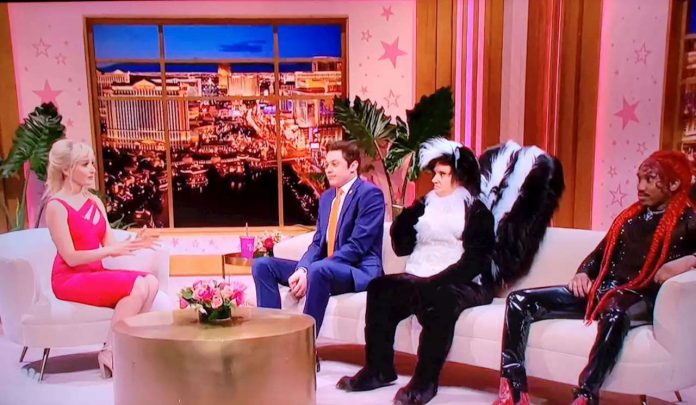 “If you come anywhere near me, just remember I have hip-hop friends and country friends — two populations that are guaranteed to own guns,” a scandal-drenched and lap dance-promising Matt Gae…

April 4, 2021
“Let me remind people, that was not the real God, that was just my friend Gary,” Redd’s Lil Nas X stated as the guy in the robe and long white beard exited the stage. In past decades, that part of the opener alone would have had the phones ringing off the hook at the Comcast-owned, as Sinead O’Conner could tell you. But in the first week of April 2021, it was the tame bit ripped from the headlines.
In that vein, cut to the growing blast radius of Gaetz’s alleged sex scandal involving minors and claims of extortion and more, plus a Kate McKinnon-played “culture of assault” promoting
, who has been dropped from the
Space Jam
sequel – and well, that’s a roaring start.
“I would love to be at a point in my career where I could turn down projects, but there’s not a lot of parts for an old French skunk,” McKinnon’s French-accented, smoking rodent told the Chloe Fineman-portrayed Spears and Lil Nas X. “The parts come down to me and Gérard Depardieu, and if you think I am the problem, I have two words for you: Speedy Gonzales. And you didn’t hear this from me, but the FBI is 99% sure Yosemite Sam was at the Capitol riots.”
McKinnon was 10 toes down as usual, but coming on the Spears’ fictional Vegas-based show, Redd’s Lil Nas X was a surprise that should in any other season of the late-night
NBC
series turn into a regular skit.

In the real world, the “Old Town Road” singer recently was “attacked by the rare combo of the Catholic Church and Nike,” as Fineman’s Spears put it so succinctly, for his legally dubious and human blood-containing Satan Shoes, which were hit with a temporary restraining order for copyright infringement by the sneaker giant on March 31. “They’re closed-minded idiots … people are afraid of me because I’m different, but really I’m your typical gay, Black, country rapper sneaker entrepreneur,” Redd’s lounging Lil Nas X declared. “I put my pants on like everyone, else, one assless chap at a time,” he added, to a big socially distanced studio audience laugh.
With all that gold, the payoff was Davidson’s sly “incredibly Florida” Gaetz. Perfect down to the twitches, Davidson’s Gaetz, a self-described “ladies man,” issued a defense that “people are just targeting me because I supported Donald Trump.” Cementing that GOP fact is weirder than
SNL
fiction, when asked by Fineman’s Spears if the sordid scandal could hurt him in the 2022 midterms, Davidson’s Gaetz responded, “Weirdly, in my district they might help.”
“I don’t know, Matt, I think I can spot a teen predator when I see one,” Fineman’s Spears deadpanned, later declaring Gaetz to be judged by his face. “After all, I was on
The Mickey Mouse Club

40 Breathable Face Masks to Wear When It’s Hot Out

The Comfy Jumpsuit Meghan Markle Wore Twice Is 50 Percent Off...

Stars Get in the Spooky Spirit for Halloween