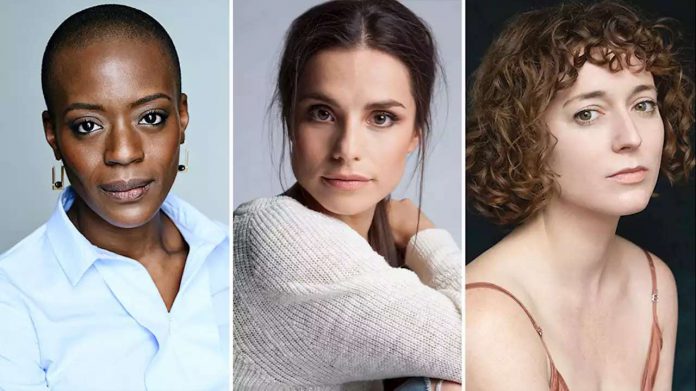 ” creators Jonathan Nolan and Lisa Joy,
Variety
has learned.
They join Jack Reynor, who stars in the lead role of Burton along with fellow cast members Chloë Grace Moretz and Gary Carr, with Moretz set to play Flynne and Carr set to play Wilf. In the novel, Burton is Flynne’s brother and a US Marine Corp veteran who served in the Haptic Recon unit. Reynor most recently appeared in the Russo Brothers’ crime drama feature “Cherry.” Prior to that, he starred in the A24 horror film “Midsommar.”
Though character descriptions have yet to be confirmed, roles are set: Charlotte Riley (“Swimming with Men”) will play Aelita; JJ Feild (“The Romanoffs”) will play Lev, Adelind Horan (“The Deuce”) will play Billy Ann Baker; T’Nia Miller (“The Haunting of Bly Manor”) will play Cherise; Alex Hernandez (“The Resident”) will play Tommy Constantine.
Nolan and Joy will executive produce “The Peripheral” under their Kilter Films banner. The book-to-screen series was first picked up by Amazon in 2019 under Kilter Films’ overall deal with Amazon Studios.

The one-hour drama hails from creator, writer and executive producer Scott B. Smith (“A Simple Plan”). Greg Plageman (“Person of Interest”) will serve as executive producer and showrunner. Vincenzo Natali (“In the Tall Grass’) will direct and executive produce, with Athena Wickham (“Westworld”) of Kilter Films, and Steven Hoban (“In the Tall Grass”) also executive producing. Amazon and Warner Bros. Television will produce.
Riley is repped by ICM Partners and Conway van Gelder Grant; Feild is repped by Mosaic LA, VERVE, The Artists Partnerships; Horan is repped by Aaron J. Sandler at Forte Artist Management and Peikoff Mahan; Miller is repped by Identity Agency Group, and Morris Yorn Barnes Levine Krintzman Rubenstein Kohner & Gellman; Hernandez is represented by A3 Artists Agency, HCKR Agency, and Brookside Artists Management.
“The Peripheral” will premiere on Prime Video in more than 240 countries and territories worldwide.
Read More About: